Question 1.
Which of the following is a plant hormone?
(a) Insulin
(b) Thyroxin
(c) Estrogen
(d) Cytokinin
Answer:
(d) Cytokinin

Question 3.
The brain Is responsible for ………
(a) thinking
(b) regulating the heart beat
(c) balancing the body
(d) all of the above
Answer:
(d) All of the above

Question 4.
What is the function of receptors in our body? Think of situations where receptors do not work properly. What problems are likely to arise?
Answer:
1. Receptors are the special type of nerve endings which can detect the specific information from the environment.

2. Generally, they are in the sensory organs such as ears, nose, tongue, eye, etc. If receptors do not work properly, the environmental stimuli will not cause nerve impulse and hence body will not be able to respond.

Question 5.
Draw the structure of a neuron and explain its function.
Answer:
Nerve cell:
Nerve cells or neurons are the building as well as functional units of the nervous system. They carry information from one part of the body to another. Nerve cell has three components:

Cell body: The cell body of a neuron is like a typical animal cell which contains cytoplasm and a nucleus. A number of short or long fibers stretch out from the cell body. These fibers are called nerve fibers.

Dendrites: The short fibers on the cell body are known as dendrites.

Axon: The longest fiber on the cell body is called axon.

Movement of Impulse (working of nerve cell):
1. The end of the dendritic tip receives message from receptors. It then initiates a neuro-chemical reaction due to which an electric impulse known as nerve impulse is produced.

2. The dendrites pass the impulse to the cell body and then to axon upto the end of axon i.e. axon terminal bud.

3. Synapse — The gap between nerve ending of an axon of one neuron and dendrite of the next neuron is called synapse.

4. At the end of the axon terminal bud, the electrical impulse releases certain chemicals.

5. These chemicals cross the gap or synapse and start similar electrical impulse in the dendrite of the next neuron. This is how the impulse or message travels from one neuron to another in the body.

6. Finally with the help of similar synapse, the impulses are delivered from neurons to other cells such as muscle cells or glands.

Question 6.
How does phototropism occur in plants?
Answer:
1. Movement of plant in response to light is called photoperiodism.

2. The shoot apex releases auxin. a growth-promoting plant hormone. When the light comes from the side of the plant, auxin diffuses towards the shady side of the shoot and helps to grow. So, the plants appear to bend towards light.

Question 7.
Which signals will get disrupted in case of a spinal cord injury?
Answer:

Question 8.
How does chemical co-ordination occur in plants?
Answer:
1. Various plant hormones are important to co-ordinate plant growth and development. In addition to this, the plant hormones also play an important role to response to the environmental stimuli.
2. The plant hormones diffuse towards the location of action, from where they are secreted.
3. For example, auxin is secreted from the shoot tip. Then, it diffuses to other cells and induces growth.

Question 10.
How are involuntary actions and reflex actions different from each other?
Answer:

Question 11.
Compare and contrast nervous and hormonal mechanism for control and co-ordination in animals.
Answer:

Question 12.
What is the difference between the manner in which movement takes place in a sensitive plant and the movement in our legs?
Answer:
Movement in the sensitive plants:
1. When we touch a mimosa plant (a touch-sensitive plant) with our fingers, the leaves of plant fold-up.
2. In this plant, the ‘touch’ of our fingers is the stimulus where as the ‘folding-up’ of the leaves is the nastic movement.
3. When the leaves of sensitive plants mimosa are touched with a finger, an electric impulse is generated which travels through the cells.
4. The electrical impulses act on a plant hormone.
5. Due to the impulse, the plant hormone makes the water migrate from the cells of one-half of a pulvinus to the intercellular spaces in the other half of the pulvinus.
6. This loss of water from one-half of pulvinus causes the pulvinus to lose its firmness which in turn makes the leaf fold.

Movement in our legs:

1. When we encounter a stimulus that can cause harm to us, we respond through reflex action. For example, if our feet by chance touches floor which is quite hot due to exposure of the sun, we quickly lift it (i.e. move). Such movements of legs are involuntary and are done under the order from spinal cord.

Question 1.
What is the difference between a reflex action and walking?
Answer:

Question 2.
What happens at the synapse between two neurons?
Answer:
Nerve cell:
Nerve cells or neurons are the building as well as functional units of the nervous system. They carry information from one part of the body to another. Nerve cell has three components:

CEO body: The cell body of a neuron is like a typical animal cell which contains cytoplasm and a nucleus. A number of short or long fibers stretch out from the cell body. These fibers are called nerve fibers.

Dendrites: The short fibers on the cell body are known as dendrites.

Axon: The longest fiber on the cell body is called axon.

2. On Inhaling this air, the fragrance comes in contact of the factory receptor cells present in the nose.

3. From these cells, this stimuli or information reaches i.e. is transmitted to the olfactory lobe in the fore-brain.

4. The brain interprets the information and so we are able to smell the agarbatti and also identify the type of fragrance such as daisy, rose or sandalwood.

5. This entire physiological process occurs within a fraction of a second.

Question 5.
What is the role of the brain in reflex action?
Answer:
1. The task done under reflex action is done through reflex arc in co-ordination with the spinal cord.

2. In reflex action, the signal is not transmitted to the brain, it is sent only to the spinal cord and the immediate response is made.

3. After the action is completed, the brain is informed or say reported about the action. The brain then keeps that action in its memory for analyzing and responding to similar stimuli in the future.

Question 1.
What are plant hormones?
Answer:
1. Plant hormones are special chemical compounds which are synthesized at one place/organ of the plants and migrate to the target organ for acting.

2. They play an important role in control and co-ordination activities of plants, as well as in growth, development and response to the environment and reproduction.

2. The movement of a shoot towards light due to growth promotes hormone auxin. It is against gravity.

Question 3.
Give an example of a plant hormone that promotes growth.
Answer:
Auxin, gibberellins and cytokinins are the growth promoter hormones. They promote cell division and cell growth. As a result, growth of plant organs occur.

Question 4.
How do auxin promote the growth of a tendril around a support?
Answer:
1. Auxins are growth promoting plant hormones.

2. Tendril is a thread like structure of the plant, which is highly sensitive to touch.

3. When the tendril comes in contact with any object/support, particularly at the apical parts of the plants, the growth hormone auxin diffuses. This promotes the growth of the tendril which then circles around or wraps to the support and grows further on the support.

Question 5.
Design an experiment to demonstrate hydrotropism.
Answer:
The movement of plant in response to water is known as hydrotropism. 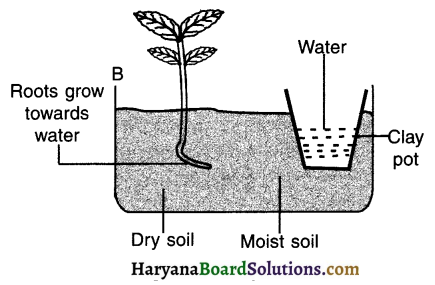 We can observe that the root of the plant does not grow deep towards the soil but rather grows in the direction of moist soil. This means the root tend to grow in the direction where water is available. This property of growth is called hydrotropism.

We can conclude from this activity that root grows and elongates in the direction of source of water. This means the root shows positive hydrotropism.

Question 2.
Why is the use of iodized salt advisable?
Answer:
Adrenal gland:

Question 3.
How does our body respond when adrenaline is secreted Into the blood?
Answer:
When adrenaline hormone is released into the body, the body shows the following responses:
(1) Increase in heart-rate
(2) Increase in breathing-rate
(3) The muscles of the ribs and diaphragm contract
(4) Eyes get opened widely

Question 4.
Why are some patients of diabetes treated by giving Insulin?
Answer:
1. In human bodies, pancreas release a hormone called insulin which regulates the level of sugar in the blood.

2. When insulin is not secreted in proper amounts, the sugar level in the blood rises and the person may suffer from a disease called diabetes.

3. Diabetes can be harmful for heart, brain, eyes, kidneys, etc.

4. Hence, in order to save the diabetic person from such harmful effects, he is given the injections of insulin which regulates his sugar level in the blood.

Aim: To detect the taste bud (gustatory receptor) and its functions

Question 1.
Put some sugar in your mouth. How does it taste?
Answer:
Sugar is sweet in taste.

Question 2.
Block your nose by pressing it between your thumb and index finger. Now eat sugar again. Is there any difference in its taste?
Answer:
When the nose is blocked, even though the sugar taste ¡s sweet, it is somewhat different than the previous sweetness.

Perform an activity to study the response of plants towards light (Photoperiodism).
Answer:
Procedure:
1. Fill a conical flask with water.
2. Cover the neck of the flask with a wire mesh.
3. Keep two or three freshly germinated bean seeds on the wire mesh.
4. Take a cardboard box which is open from one side.
5. Keep the flask in the box in such a manner that the open side of the box faces light coming from a window as shown in the figure.
6. After two or three days, you will notice that the shoots bend towards light and roots away from light.
7. Now turn the flask so that the shoots are away from light and the roots towards light. Leave it undisturbed in this condition for a few days.

Observation:
The shoot apex releases auxin, a growth promoting plant hormone. When the light comes from the side of the plant, auxin diffuses towards the shady side of the shoot and helps to grow. So, the plants appear to bend towards light. 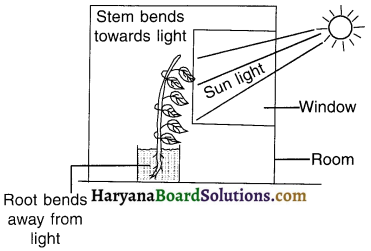 Question 1.
Have the old parts of the shoot and root changed direction?
Answer:
The older part of the shoot shows a slight movement towards light. Moreover, here the root grows slightly away from the light.

Question 2.
Are there differences in the direction of the new growth?
Answer:
The upcoming or young parts of the shoot bend more towards the light and the root apex moves away from the light.

(i) Look at Figure 7 of text-book — Endocrine glands in human beings.
(ii) Identify the endocrine glands mentioned in the figure.
(iii) Some of these glands .have been listed in Table and discussed in the text. Consult books in the library and discuss with your teachers to find out about other glands.

Name of glands shown in the figure:

Hormones are secreted by endocrine glands and have specific functions. Complete Table 1 based on the hormone, the endocrine gland or the functions provided. Table 1: Some important hormones and their functions