2. Therefore, carbon shares its four electrons, one electron each with three hydrogen atoms and one electron with a chlorine atom to form four covalent bonds and complete its octet. 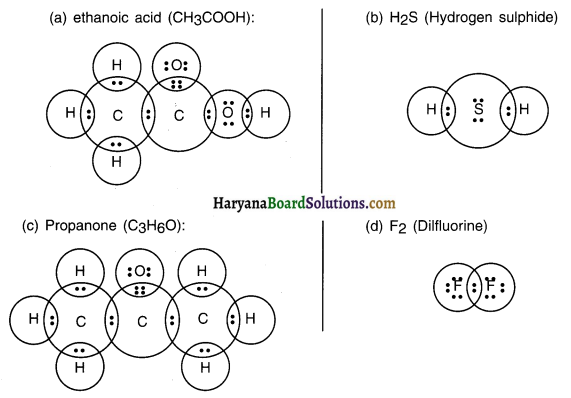 Question 10.
Explain the formation of scum when hard water is treated with soap.
Answer:
1. Hard water contains salts of calcium and magnesium.
2. When soap molecules come in contact with these salts, they form a curdy white precipitate, insoluble in water. This is called scum.

Question 11.
What change will you observe you test soap with litmus paper (red and blue)?
Answer:
Soap is alkaline (basic) in nature. Hence, it does not show any effect on the blue litmus paper. However, soap will turn red litmus paper blue.

Question 12.
What is hydrogenation? What is its Industrial application?
Answer:
1. A reaction in which adding one molecule to an organic compound gives a new but single organic compound is called an addition reaction.

2. For example, on adding hydrogen to an unsaturated (alkene or alkyne) hydrocarbon in the presence of catalysts such as palladium or nickel gives a single but saturated (alkane) product. This reaction is called an addition reaction.

Question 14.
Give a test that can be used to differentiate between saturated and unsaturated hydrocarbons.
Answer:
1. Alkaline potassium permanganate (KMnO4) can be used to test if the compound is saturated or unsaturated.
2. Put some butter in one test tube and cooking oil in another. Add KMnO4 to both.
3. The pink colour of KMnO4 will disappear in oil but not in butter. Hence, we can conclude that cooking oil is unsaturated whereas butter is not.

Question 15.
Explain the mechanism of the cleaning action of soaps.
Answer:
Detergents:

Question 2.
What are the two properties of carbon which lead to the huge number of carbon compounds we see around us?
Answer:
(1) Catenation:

Question 3.
What will be the formula and electron dot Structure of cyclopentane?
Answer: 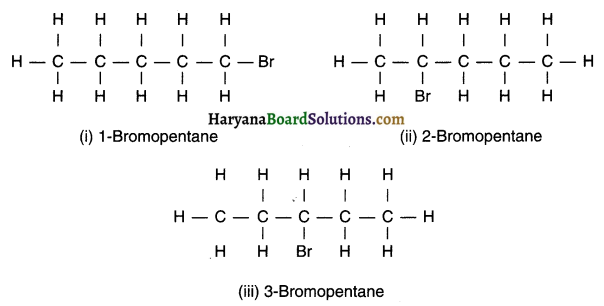 Question 5.
How would you name the following compounds?
Answer:

The name of the compounds are (i) Bromoethane, (ii) Methanal and (iii) 1, Hexyne

Question 2.
A mixture of oxygen and ethyne is burnt for welding. Can you tell why a mixture of ethyne and air is not used?
Answer:
Over and above oxygen, air also contains other gaseous contents. So, sufficient oxygen will not be available for wielding and it will result in incomplete combustion with a sooty flame. Using pure oxygen will give a complete combustion with blue flame. Hence, oxygen and not air s used for welding.

Question 2.
What are oxidizing agents?
Answer:
Oxidizing agents are substances which add oxygen to other substances.
Example:
Alkaline potassium permanganate or acidified potassium dichromate can give oxygen to alcohols to convert them into carboxylic acids.

Question 1.
Would you be able to check if water is hard by using a detergent?
Answer:
Detergent is equally effective in both hard and soft water. Hence, we cannot check if the water is hard or soft using detergent.

Question 2.
People use a variety of methods to wash clothes. Usually after adding the soap, they ‘beat’ the clothes on a stone, or beat it with a paddle, scrub with a brush or the mixture Is agitated in a washing machine. Why is agitation necessary to get clean clothes?
Answer:
1. The dirt that sticks to our clothes is oily in nature. We know that oil is not soluble water. So, if we simply rinse the dirty cloth in water, the cloth will not become clean because the oily dirt will not dissolve in water and remain stuck to the cloth. So, to remove the dirt one has to make some action that can help to break the dirt or make it thin.

2. Agitation i.e. stirring the clothes is also one such act that helps in making the dirt layer thin. Later, the action of soap easily cleans the clothes.

Students should do this activity on their own.

Question 2.
Is there any similarity in these three?
Answer:
All the compounds belong to the same functional group of alcohol ( – OH). Hence, all the compounds have similar chemical properties.

Question 4.
Generate the homologous serles for compounds containing up to four carbons for the other functional groups given in table 4.3 of textbook.
Answer:

Answer:
The nature of flames obtained by burning various carbon compounds is given in the table below:

Observation and conclusion:
1. Camphor and alcohol burns with a blue non-sooty flame without any residue. This means complete combustion takes place. As a result, alcohol is a saturated compound.

2. When excess potassium permanganate is added, the colour does not disappear because due to excess KMnO4 there is no alcohol left in the test-tube and hence no reaction takes place.

Aim: To study the reaction of sodium metal with ethanol.

Answer:
Teacher’s demonstration:
Drop a small piece of sodium, about the size of a couple of grains of rice, into ethanol (absolute alcohol). What do you observe? How will you test the gas evolved?

Observation:
(i) Sodium reacts vigorously with ethanol and hydrogen gas is released.
(ii) On taking a lighted match stick near the product, the gas burns with a pop sound. This confirms that hydrogen gas is present as one of the product.

Aim: To study the strength of dilute acetic acid and dilute hydrochloric acid.

Aim: To study the preparation of ester and its properties.

(i) Take 1 mL ethanol (absolute alcohol) and 1 mL glacial acetic acid along with a few drops of concentrated sulphuric acid in a test tube.
(ii) Warm in a water bath for at least five minutes as shown in figure.
(iii) Pour into a beaker containing 20-50 mL of water and smell the resulting mixture.
Answer: 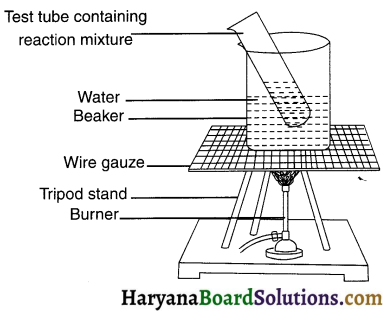 When the mixture of absolute alcohol and glacial acetic acid is heated in the presence of concentrated sulphuric acid, it produces a sweet smelling ester called ethyl acetate. 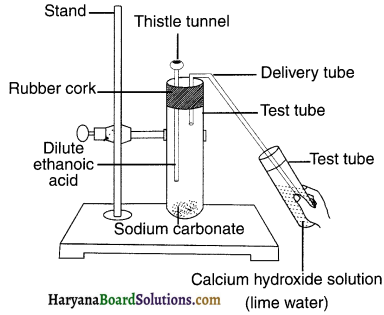 Answer:
1. A brisk effervescence appears due to the evolution of CO2 gas.
2. The gas turns lime water milky due to formation of insoluble calcium hydroxide.
3. Yes, the CO2 gas produced is identified in the test.
4. Similar observations as above will be seen when activity is done with sodium hydrogen carbonate.

Aim: To study the solubility of oil in soap solution.

Aim: To study how soap reacts with hard and soft water.

1. Take about lo mL of distilled water (or rain water) and 10 mL of hard water (from a tube well or hand-pump) in separate test tubes.
2. Add a couple of drops of soap solution to the test tubes.
3. Shake the test tubes vigorously for an equal period of time and observe the amount of foam formed.

Aim: To study the solubility of soap and detergent in hard water.