→ Composite number: A whole number that can be divided evenly by numbers other than 1 or itself is called composite numbers e.g., 4, 6, 8, 9 …, etc.

→ Number line: Refers to a straight horizontal line on which each point represents a real number.

Basic Concepts
1. Irrational Numbers: In previous section, we observe that some numbers are not rational. These numbers can not write in the form of \(\frac{p}{q}\), where p and q are intergers and q ≠ 0.
For example: 0.141441444…., 0.232332333…..
In 400 B.C., the famous Mathematician Pythagoras was the first to discover the number which were not rational. These numbers are called irrational numbers.
Let us define these numbers as an irrational is a non-terminating and non-recurring decimal, that is, it cannot be written in the form \(\frac{p}{q}\), where p and q are integers and q ≠ 0.

(b) Decimal Expansions of Rational Numbers: A rational number can be expressed as a decimal. For example, if we divide 3 by 5, we will get 0.6, a terminating decimal. 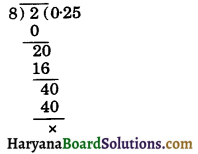 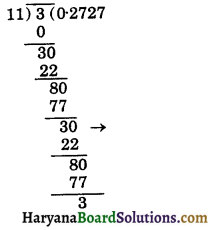 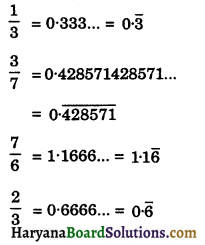 Representing Real Numbers on the Number Line: In the previous section, we have learn about the decimal expansions of real numbers. This help us to represent it on the number line. In this section, we will learn how to visualise the position of real numbers in decimal form. 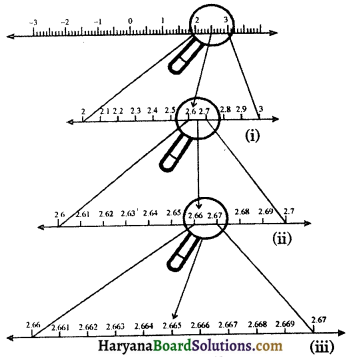 Suppose we want to visualise the representation of 2.665 on the number line. We observe that 2.665 is located between 2 and 3. So let us look closely at the portion of the number line 2 and 3. We divide it into 10 equal parts and mark each point of division as shown in figure 1.10. Then the first mark to the right of 2 will represent 2.1, the second 2.2 and so on. To see this clearly we may take a magnifying glass and look at the portion between 2 and 3. Now, we observe that 2.665 lies between 2.6 and 2.7. To get more accurate visualization of the representation, we divide this portion of real line into 10 equal parts. The first mark will represent 2.61, the second 2.62 and so on.

Again, 2.665 lies between 2.66 and 2.67, so let us focus on this portion of the number line. We magnify the portion of line between 2.66 and 2.67 and divide it into 10 equal parts. The first mark represents 2.661, the next one represents 2.662 and so on. So 2.665 is the 5th mark in these subdivisions. We call this process of visualisation of representation of numbers on the number line through a magnifying glass, as the process of successive magnification.

The facts related to operations on real numbers are given below:

2. Existence of Square Root of a given Positive Real Number:
To find \(\sqrt{x}\) geometrically, where x is any positive real number.
Construction: Draw a line AB of length x units extend AB to point C such that BC = 1 unit. Find the midpoint of AC and marked that point O. Draw a semicircle with centre O and radius OA. Draw a line perpendicular to AC passing through B and intersecting the semicircle at D, then BD = \(\sqrt{x}\). 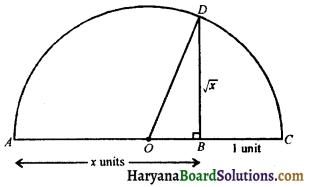 Laws of Exponents for Real Numbers:
Let a be real number and m, n be rational numbers, then we have 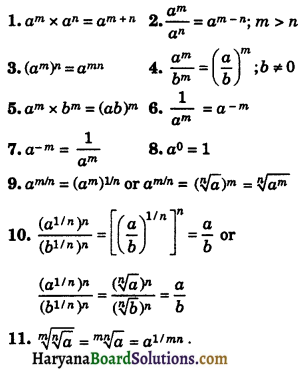 Note: Here a is called base and m, n are called exponents.