Question 1.
Why do organisms need to take food?
Answer:
Food is needed by all living organisms for four main purposes:
(i) An important function of food is to help a living organism to grow, if enough food is not given or it is not of the right kind, growth will not be sufficient or healthy.
(ii) Second important function of food is to provide energy. We need energy for doing physical work. We use more energy when we run than when we walk and less energy when we sleep. Energy is given by hidden materials present in our food.
(iii) Food is also needed by living beings for replacement and repairing their damaged body parts.
(iv) Food gives us resistance against diseases and protects us from infections.

Question 2.
Distinguish between a parasite and a saprotroph.
Answer:
Parasite:
The mode of nutrition in organisms which derive their food from the body of some other living organism is called parasite nutrition. Such organism are called parasite. Examples of parasites are Tapeworm, Roundworm, Malarial parasite, Cuscutta, Puccinia (a fungus) etc.

Question 3.
How would you test the presence of starch in leaves?
Answer:
Starch Test:
(i) Take the green leaf to be tested.
(ii) Boil it in water for 5 minutes.
(iii) Keep it in the 60% angle amyle alcohol at 60°C till it becomes colourless.
(iv) Take the colourless leaf out from alcohol and wash it with cold water.
(v)Pour few drops of dilute Iodine solution on the leaf. The leaf becomes very blue with the solution which proves the presence of starch in the leaf.

Green plants require four things to prepare their own food. These are:
1. Carbon dioxide, absorbed from the atmosphere through stomata present on the leaf surface.
2. Water, absorbed from the soil, through the root system.
3. Chlorophyll, present in the leaf.
4. Light, coming from the sun.
During photosynthesis, food is synthesized.
Oxygen is released in the process.

Question 5.
Show with the help of a sketch that the plants are the ultimate source of food.
Answer: 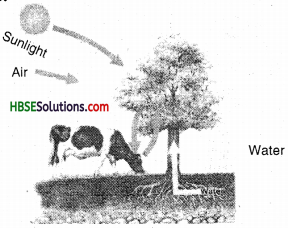 Question 6.
Fill in the blanks:
(a) Green plants are called ………….. since they synthesise their own food.
(b) The food synthesised by the plants isstared as …………… .
(c) In photosynthesis solar energy is captured by the pigment called …………… .
(d) During photosynthesis plants take in ………. and release ……………. .
Answer:
(a) autotrophs
(b) solar enetgy
(c) chlorophyll
(d) carbon dioxide, oxygen.

Question 7.
Name the following:
(i) A parasite plant with yellow, slender, tubular stem.
(ii) A plant that has both* autotrophic and heterotrophic mode of nutrition.
(iii) The pores through which leaves exchange gases.
Answer:
(i) Cuscuta (Amarbet)
(ii) Pitcher plant
(iii) Stomata

Question 9.
Match the items given in column I with those in Column II:

Question 11.
Choose the correct option from the following:
Which part of the plant gets carbon dioxide from the air for photosynthesis?
(i) Root hair
(ii) Stomata
(iii) Leaf veins
(iv) Sepals.
Answer:
(ii) Stomata.

Question 1.
Project
Take a potted plant with broad leaves. Take a strip of black paper and cut out a small square in its centre. Cover a part of a leaf with this paper
and secure it the occurrence of photosynthesis 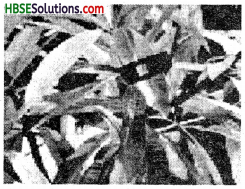 with paper clips. Keep the plant in the sunlight for 2-5 days. Observe the difference in the colour of the covered and the uncovered portions on the leaf. Perform iodine test on leaf. Did the two parts show any difference in results? Remove the strip and expose the covered part to the sunlight for 2-3 days and do the iodine test again. Describe your observations.
Answer:
Do yourself.

Question 2.
Visit a green house if there is one near your place. Observe how they raise plants. Find out how they regulate the light, water and carbon dioxide.
Answer:
Do yourself. Take the help of your teacher.

Question 3.
Try growing a sweet potato just in water. Describe your experiment and observations.
Answer:
Do yourself. Take the help of your teacher.

Question 2.
Define the term Nutrition.
Answer:
The process of taking or consuming and utilising food is called nutrition.

Question 3.
Define Photosynthesis?
Answer:
The process by which the green plants prepare food using carbon dioxide and water in the presence of chlorophyll and light is called photosynthesis.

Question 4.
Mention the role of chlorophyll in photosynthesis.
Answer:
The leaves have a green pigment called chlorophyll. It helps leaves to capture the energy of the sunlight. Without chlorophyll, photosynthesis will not tajte place.

Question 5.
Plants make food from water and carbon dioxide. What else is needed?
Answer:
Chlorophyll and sunlight are also needed to the plant for photosynthesis.

Question 6.
What would happen if there are no green plants on the earth?
Answer:
In the absence of green plants there will not be any living being.

Question 7.
What is the purpose of starch test?
Answer:
The confirmation of the presence of starch in the green plants also confirms that photosynthesis has taken place in the plant.

Question 1.
‘All animals depend upon plants for food’. Justify the statement.
Answer:
Green parts of the plants have the ability to prepare their own food which is stored in their various parts. All the animals do not have such property. So they depend on plants for their food directly or indirectly.

Question 3.
Differentiate between carnivores, Herbivores and Omnivores.
Answer:
Carnivores: Animals like lion, tiger, snake and leopard that depend on other animals for their food are called carnivores.
Herbivores: Animals like cow, goat, horse, sheep, deer and elephant that depend on plants for their food are called herbivores.
Omnivores: Omnivores are those which depend on both plants and animals for food, e.g. man, pig, hen, bear, crow etc.

Question 4.
Differentiate between saprophytes and epiphytes.
Answer:
Saprophytes: These are the organisms that depend upon dead and decaying matter for food e.g., Monotropa (a bacteria) etc. These grow during or after the rainy season.
Epiphytes: These grow on the trees but only for support. They possess green leaves and can prepare their own food by absorbing moisture from the atmosphere. They have special roots called the aerial roots for this purpose e.g. orchids.

Question 5.
What do you understand by parasite, saprophyte and symbiosis? Give one example for each.
Answer:
Parasites: Such living organisms are those which depend on other living beings for their food. They may also depend on host not only for food but also for shelter too. e.g., Lice, Leech, Bed bug.
Saprophytes: Such organisms are those which take the dead and decayed organic substances in the form of their food e.g., kite.
Symbiosis: It is the phenomenon in which two plants live together in such a way that both are beneficial for each other, e.g., Rhizobium bacteria live in the nodules of Leguminous plants.

Question 6.
Some plants are both parasite and saprophyte. Explain with examples.
Answer:
There are some plants which survive like parasite as well as saprophyte. For example, Lichen. In lichen algae which is green in colour and lives on the upper side of the plant in the sun and prepares its own food during photosynthesis. The lower part of lichen in fungus which is saprophyte in nature. Both live together in it.

Question 1.
Describe an experiment to prove that chlorophyll is necessary for photosynthesis.
Answer:
1. Pluck one or two leaves from Croton and Coleus plant in the evening so that they have synthesised starch.
2. Make an outline sketch of the leaf to mark green and non-green areas of the leaf.
3. Boil the leaf in alcohol over a water bath till the chlorophyll and other pigments are washed out.

Question 3.
Describe an experiment to prove that light is necessary for photosynthesis.
Answer:
1. Destarch the leaves of a potted plant by placing them in total darkness for about 24-48 hours.
2. Cover tightly one of the leaves with a leaf clasp or a strip of black paper on both the surface of the leaf. Use clips or cellotape to fix the black paper.
3. Put the experimental set up in sunlight for a few hours.

1. Carbohydrates, proteins, fats, vitamins and minerals are components of food. These components of food are necessary for our body and are called nutrients.
2. Nutrition is the mode of taking food by an organism and its utilization by the body.
3. The mode of nutrition in which organisms make food themselves from simple substances is called autotrophic (auto = self; trophos = nourishment) nutrition. Green plants are autotrophs.
4. Animals and most other organisms take in ready-made food prepared by the plants. They are called heterotrophs (heteros = other).
5. (a) The process by which green plants prepare their own food is called photosynthesis.

(b) Photosynthesis can be summarized as follows: 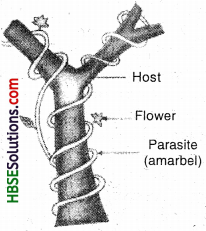 8. In,sect,ivores are the green plants growing in marshy areas. They obtain their nutrition partly from the soil and atmosphere and partly from the insects, e.g,, pitcher plant, venus fly-trap, sundew plant and bladderwort.
9. Some organisms live together and share shelter and nutrients. This is called symbiotic relationship. For example, certain fungi live in the roots of trees. The tree provides nutrients to the fungus and, in return, receives help from it to take up water and nutrients from the soil. This association is very important for the tree.
10. In a lichen, algal and fungal partners live together and both are mutually beneficial. Algal component of a lichen is autotrophic. It provides food material to the fungal component in the lichen. In return, the fungus (heterotroph) provides shelter, water and minerals to the alga. 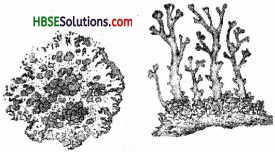