Question 1.
Rearrange the boxes given below to make a sentence that helps us understand opaque objects.

Question 2.
Give one example of a living thing which emits light.
Answer:
Firefly (Jugnu) is a living source of light.

Question 5.
What is the shape of the shadow?
Answer:
It is similar to the object which forms shadow.

Question 6.
How are shadows formed?
Answer:
Light coming from the source of light falling on the objects obstructed by the objects and does not go ahead. So a shadow is formed.

Question 10.
What is a shadow?
Answer:
A dark patch formed behind an opaque object when it is placed in the path of light is called a shadow.

Question 11.
What is umbra?
Answer:
A region of total darkness is called umbra. No ray of light enters this region.

Question 12.
Define penumbra.
Answer:
A region of partial darkness which surrounds the umbra is called penumbra, some light rays reach this region.

Question 13.
What do we call a body that shines of its own?
Answer:
Luminous body.

Question 15.
What do we call a substance through which light can pass?
Answer:
Transparent substances.

Question 16.
Define opaque substance?
Answer:
The substance through which no light can pass.

Question 20.
Define reflection of light.
Answer:
When a beam of light is incident on a smooth surface, apart of it os scattered back into the same medium, it is called reflection.

Question 1.
Name any four artificial sources to scattering of fight. The air around the objects of light. allows this scattered fight to pass through it and
Answer:
1. Candle,
2. the oil jaino
3. tube
4. toren
5.electric bulb.

Question 5.
State the difference between umbra and penumbra.
Answer:

Question 9.
Give two effects of light on plants.
Answer:
(i) Plants use light energy to prepare their own food.
(ii) The tips or short apex of a photogenic plant moves towards it. Light acts as a stimulus to plants.

Question 16.
What would be the shape of an object so that it will cast no shadows on the ground in the light of sun?
Answer:
An object casts no shadow (or very little shadow) on the ground in sunlight when it is either transparent or it is at such a height from the earth that the umbra does not reach the surface of the earth. .

Question 17.
Why is your shadow longest at sunrise and shortest at noon?
Answer:
In the morning at the time of sunrise and in the evening at the time of sunset light rays falling on the earth are not straight. They are inclined. This is why our shadow at this time both (morning and evening) is the longest. At noon the sun is just over above our head and sun-rays fall vertically on the earth. Due to the vertical sun-rays, our shadow formed at noon is the shortest.

Question 18.
What does an object do when light falls on it?
Answer:
It may allow to pass the light through or it may completely cut the light from passing through by absorbing the light or it may scatter the light incident on it.

Question 19.
Why is silvered glass used as a mirror?
Answer:
The silvered glass has a smooth surface and the smoothness helps in forming clear image. Silvering makes it shiny and the shiny surface helps in reducing the absorption.

Question 1.
Define the structure and working of a pin-hole camera.
Answer:
Pin-hole camera: It is a simple application of the rectilinear propagation of light.
Construction:
It consists of a rectangular card board box, such that its one side is made of ground glass screen, the side opposite to ground glass has a hole in the middle, whose size is equal to the pin-head of a common pin. The box is blackened from inside, so as to absorb any light falling on its walls.

Working:
(1) Consider a lighted candle AB, in front of pin-hole camera. The rays starting from points of candles, travel in all directions.
(2) A ray of light starting from point ‘A’ along with AH after passing through the pin-hole falls on ground glass screen at point ‘A’.
Similarly another ray starting from point ‘B’ along with BH after passing through the pin-hole will fall on ground glass screen at point ‘Bj
(3) A1B1 is the image of AB. The image formed here is turned upside down, because light travels in straight line. 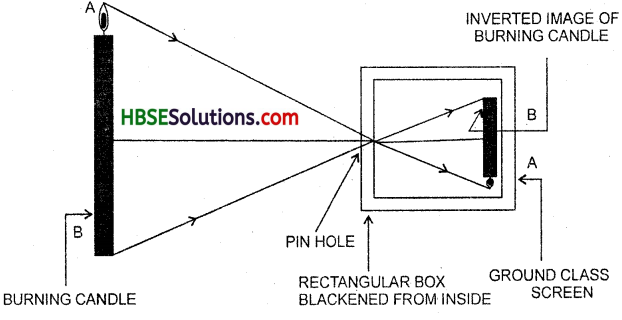