Question 1.
Which two laws did the scientist Antonie L. Lavoisier establish who laid the foundation of chemical sciences?
Answer:
(1) Law of Conservation of Mass.
(2) Law of Constant Proportions.

Question 6.
What is an atom ?
Answer:
Atom is that smallest particle of an element, in which all the chemical properties of that element are present and it also maintains those properties.

Question 7.
Which principle did John Dalton introduce regarding the nature of matter ?
Answer:
According to John Dalton, all the matter, whether element, compound or mixture are formed of small particles, which are called atoms.

Question 10.
Define a molecule.
Answer:
A molecule is that smallest particle of an element or a compound which has its individual or independent existence and it displays all the properties of that substance (element or compound).

Question 11.
Write down the names and symbols of any two monoatomic molecules.
Answer:
Argon (Ar) and Helium (He). –

Question 18.
What does the abbreviation IUPAC stand for?
Answer:
IUPAC means International Union of Pure and Applied Chemistry.

Question 21.
What is the difference between N2 and 2N ?
Answer:
N2 is a molecule of nitrogen, whereas 2N are two atoms of nitrogen. .

Question 27.
What is meant by mass formula ?
Answer:
The mass formula of a substance is the sum total of atomic mass of the entire atoms existing in the formula unit of that compound, whether
it is a molecule or not, it doesn’t concern.

Question 31.
Who provided information about atom and when?
Answer:
John Dalton in 1808 A.D. ‘

Question 32.
What is called as writing of an element in short form?
Answer:
Symbol.

Question 33.
What is the symbol of copper ?
Answer:
Cu.

Question 34.
What is the symbol of aluminium ?
Answer:
Al.

Question 35.
Write down the symbols of gold and silver.
Answer:
Gold = An, Silver = Ag

Question 37.
What is meant by atomicity ?
Answer:
Number of atoms present in a molecule of an element is called its atomicity.

Question 38.
What is the atomicity of inert gases?
Answer:
One.

Question 42.
Give the chemical formula of copper chloride.
Answer:
CuCl2.

Question 44.
What is mole ?
Answer:
Mole is the quantity of matter in which 12 g of C-12 the number of molecules (atoms, molecules or ions) that have an equal number of atoms.

Question 46.
Define molar mass.
Answer:
The mass of one-mole molecules of a substance is called as molar mass.

Question 47.
What is the symbol and unit of molar mass?
Answer:
Symbol: M.
Unit: g/mol or Gram per mole.

Question 1.
Discuss the basic principle introduced by John Dalton regarding the nature of matter.
Answer:
The basic principle introduced by John Dalton regarding the nature of matter states that all substances whether they are elements, compounds or mixtures are composed of minute particles called atoms. It can be discussed as follows:
(1) Element is composed of very tiny indivisible particles, which are called atoms.
(2) All the atomic masses and characteristics or properties of a given element are equal in both. Atoms
of different elements have different masses and properties.
(3) The creation and destruction of atoms of an element cannot be transformed into atoms of other element.
(4) When atoms of different elements combine themselves in smaller but complete ratio, then they form compounds.
(5) In the given compound the relative number and kinds of atoms remain constant.
In brief, atom is the smallest particle of an element that keeps its chemical identity in all chemical and physical changes. The atoms of an element are different from the atoms of other elements.

Question 2.
How is modern concept different from that of the Daltons principle in terms of atom ?
Answer:
According to Daltons opinion, atom is the smallest and indivisible particle of matter and atom can neither be created nor destroyed, but according to the modem concept an atom can be further divided into even more smaller particles – electrons, protons and neutrons. Nowadays, by splitting the nucleus of atom, atom bomb is made, which expresses the difference from the law of indestructibility of atom.

Question 3.
What were the drawbacks found in the principle of Dalton ? Clarify with examples.
Answer:
Daltons principle could not explain some of the facts, which are as follows:
(1) Diamond and Graphite are formed of the same element, even then why is there so much difference in their properties ? Diamond is the hardest and the brightest thing found in nature and graphite on the other hand, is soft and of black colour.
(2) According to the principle of atom, atom is an indivisible particle, but according to the modem discoveries; atom is formed of protons, electrons and neutrons in a combined way.
(3) Mass of two atoms of an element can also be different like uranium has two isotopes 92U235 and 92U238whose atomic mass is 235u and 238u respectively.

Question 4.
Explain that atom is divisible rather than indivisible.
Answer:
A comprehensive study has proved that atoms of certain elements release radiations that are capable to penetrate through many substances like paper. The emission of radiations or particles from atoms proves this thing that atoms are not indivisible but, divisible.

Question 5.
How big are atoms in size?
Answer:
Atoms are very small. They are even smaller than a thing that we can imagine or compare. When millions of atoms are stacked, then it would hardly form a thick layer same as thick that of a sheet of paper.

Question 6.
Show the radii of the following substances in metres:
(1) Atom of hydrogen
(2) Molecule of water
(3) Molecule of haemoglobin
(4) Grain of sand.
Answer:

Question 7.
Fill in the blanks:
(1) Element is composed of only one type of
(2) In a hydrogen molecule, the number of hydrogen atoms are
(3) A compound is formed of with the combination of at least elements.
Answer:
(1) atoms
(2) two
(3) two.

Question 8.
Write down the symbols of the following elements : aluminium, calcium, cobalt, iodine and mercury.
Answer:

Question 11.
On the basis of Latin names, write down names and symbol of some elements.
Answer: 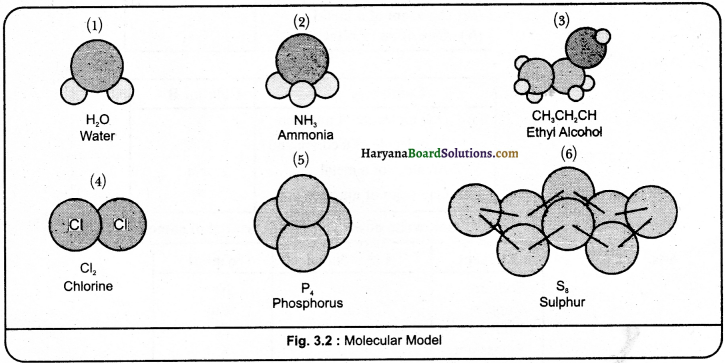 Question 18.
What is meant by monoatomic, diatomic and polyatomic?
Answer:
Monoatomic: Elements that are found in the form of single atom are called monoatomic. For example, Helium (He) and Neon (Ne).
2. Diatomic: Those elements that have two atoms in a single molecule, are called diatomic. For
example, Hydrogen (H2), Oxygen (O2), and Nitrogen (N2).
3. Polyatomic: The elements that consist of more than two atoms in their single molecule are called
polyatomic. For example, Phosphorus (P4) , and Sulphur (S9).

Question 13.
A compound ‘X’ after analysing produces 85.72% carbon and 14.28% hydrogen. 1f the molar mass of the compound is 28, then find out its molecular formula.
Solution : Proportionality formula = C2H4

Question 2.
Write down the formulae of the following compounds: .
(1) Hydrogen Chloride
(2) Hydrogen Sulphide
(3) Carbon tetrachloride
(4) Magnesium Chloride
(5) Calcium Oxide
(6) Aluminium Oxide.
Answer:
While writing the chemical formulae of molecular compounds, the symbols of each formed combined elements are written, thereafter, their valencies are written. Finally, the valencies of the combined atoms are crossed over and then the molecular formula is written.
(1) Formula of Hydrogen Chloride

Here the valences of both elements is same. Hence, its formula will be Ca2O2, but we write this formula in a simple form i.e., CaO.

Experiment 1.
Prove with an experiment the law of solutions conservation of mass.

Procedure:
Prepare a 5% solution of copper sulphate and sodium carbonate in water. Now, take a little quantity of sodium carbonate solution in a conical flask and take a little quantity of copper sulphate in a test tube and suspend it into the conical flask in such a way that both the solvates should not get mixed up with each other as shown in the figure. After that fix it to the neck of flask and find its mass. Now, rotate the flask in a tilted position so that both the solutions get mixed up together. Now, again note down the mass of the flask. You will notice that before and after the activity the mass of the conical flask remains constant. This proves the law of mass conservation. 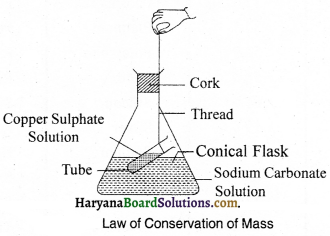 Procedure:
Suppose a fruit seller is selling fruits without standard weights. He takes a watermelon and says “This has a mass equal to 12 units.” He chops the watermelon into 12 equal pieces and finds that the mass of each fruit being sold by him is relative to the mass of the single piece of the watermelon. As shown in the figure. Now, he sells the fruits by relative fruit mass unit (frnu). Thus, the relative atomic mass of an element is defined as average mass of its atoms w.r.f. the mass of 1/12 th part the mass of one carbon-l2 atoms. 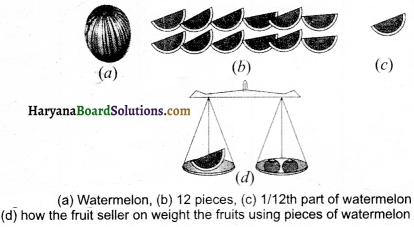 List of Symbols and Atomic Masses of Some Common Elements

Some Common, Simple and Polyatomic ions

Quick Review of the Chapter

5. The symbol of hydrogen proposed by Dalton was:

6. According to Dalton, the symbol of phosphorus was: