Introduction
The word ‘geometry’ is derived from the Greek words ‘geo’, means the ‘earth’, and ‘metrein’, means ‘to measure’. So, it appears to have originated from the need for measuring land. Many ancient civilization of Egypt, Babylonia, India, Greece, China have studied the ‘geometry’ in various forms. They short out the several practical problems which required the development of geometry in various ways.

In Indus Valley Civilization, the ratio length : breadth : thickness of the bricks was taken as 4 : 2 : 1.

Construction of altars (or vedis) and fireplaces for performing Vedic rites were originated in Vedic period. Square and circular altars were used for household rituals, while shape of altars were the combination of rectangles, triangles and trapeziums. They are used for public worship. The ‘sriyantra’ consists of nine interwoven isosceles triangles which are arranged in such a way that they produce 43 subsidiary triangles. A Greek mathematician, Thales, (640 BC) gave the first known proof of the statement that a circle is bisected (cut into two equal parts) by its diameter. 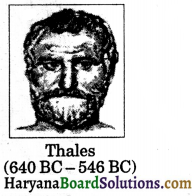 Pythagoras (572 BC) was the most famous pupil of Thales discovered many geometric properties and developed the theory of geometry to a great extent. This process continued till 300 BC. His important theorem is; In right triangle, the square of hypotenuse is equal the sum of the square of base and square of perpendicular. 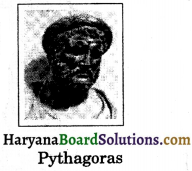 Euclid (300 BC) was a mathematics teacher who was born in Alexandria in Greece introduced the method of proving mathematical results by using deductive logical reasoning and the previously proved results. The geometry of plane figure is known as “Euclidean Geomery.” 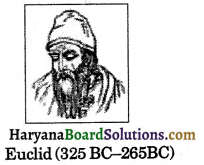 The Indian Mathematician, Aryabhatta (born 476 AD) worked out the area of an isosceles triangle, the volume of a pyramid and approximate value of π. 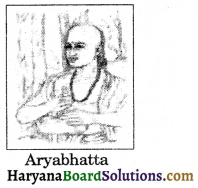 Brahmagupta (born 598 AD) discovered the formula for finding the area of cyclic quadrilateral. 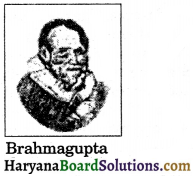 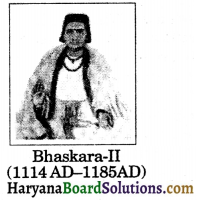 In this chapter, we shall study the Euclid’s approach to geometry.

→ Proof – The course of reasoning which establishes the truth of a statement.

→ Logic – The science or art of reasoning.

→ Universal – Belonging to all.

→ Coincide – To occupy the same space.

→ Proposition – A statement of something to be done.

→ Interpreted – To exposed the meaning of.

→ Demonstrate – To prove with certainly.

→ Superposed – To put or place over or above.

Basic Concepts
Euclid’s Definitions, Axioms and Postulates:
(a) Euclid summarised the work of ‘geometry’ as definitions. He listed 23 definitions in Book 1 of ‘Elements’. A few of them are given below:

In these definitions, we observe that, point, line, breadth, length, plane etc. are undefined terms. The only thing is that we can represent them intuitively or explain them with the help of ‘physical models.’

Starting with these definitions, Euclid assumed certain properties, which were not to be proved. These assumptions are actually “obvious universal truths”. He divided them into two types: axioms and postulates. He used term ‘postulate’ for the assumptions that were specific to geometry. Common notions (often called axioms), on the other hand, were. assumption used throughout mathematics and not specifically linked to geometry.

(c) Postulate: A statement whose validity is accepted without proof, is called a postulate.
Euclid gave five postulates stated as below:
Postulate 1: A straight line may be drawn from any one point to any other point.
This postulate tells us that at least one straight line passes through two distinct points which is shown in the figure below:

Axiom 5.1. Given two distinct points, there is a unique line that passes through them. 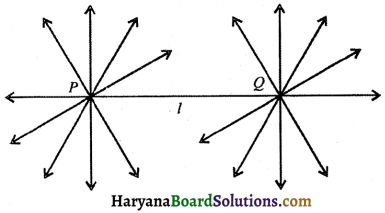 Postulate 2: A terminated line can be produced indefinitely. 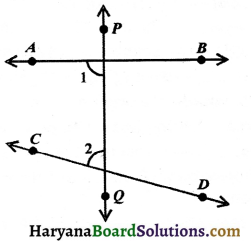 Theorem: In mathematics, a theorem is a statement that has been proven on the basis of previously established statements, such as other theorems and previously accepted statements, such as axioms. The derivation of a theorem is often interpreted as a proof of the truth of the resulting expression, but different deductive systems can yield other interpretations, depending on the meanings of the derivation rules. The proof of a mathematical theorem is logical argument demonstrating that the conclusion.

(e) Some terms allied to Geometry:
(i) Point: A point is a mark of position, which has no length, no breadth and no thickness. We represent a point by a capital letters A, B, C, P, Q etc., as shown in the figure.

(ii) Plane: A plane is a every surface such that point of the line joining any two points on it, lies on it.
The surface of the top of the table, surface of the smooth blackboard and surface of a sheet of paper are the some close examples of a plane surfaces are limited in extent but geometrical plane extends endlessly in all directions.

(iii) Line: A line has length but no breadth or thickness. A line has no ends points. A line has no definite length. It can be extended infinitely in both the directions. The given figure shows line \(\bar{AB}\).

Some times we shall denote lines by small letters such as l, m, n, p etc.

(iv) Ray: It is a straight line which starts from a fixed point and moves in the same direction. A ray has one endpoint and it has no definite length.
The given figure shows a ray \(\overrightarrow{A B}\).

(v) Line segment: It is a straight line with its both ends fixed. The given figure shows a line segment \(\bar{AB}\), with fixed ends A and B. A line has a definite length.

So, a line segment is the shortest distance between two fixed points.

(vi) Collinear points: Three or more than three points are said to be collinear, if they lie on the straight line.
The given figure shows the collinear points P, Q, R while A, B, C are non-collinear.

(vii) Parallel lines: The straight lines which lie in the same plane and do not meet at any point on producing on either side, are called parallel lines.
If l and m are parallel lines in a plane, we write l || m.

The distance between the two parallel lines always remains same. 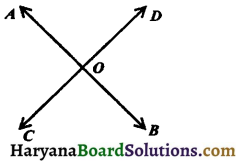 (ix) Concurrent lines: In the figure 5.19, the lines pass through the same point. In this case, lines are called concurrent lines. 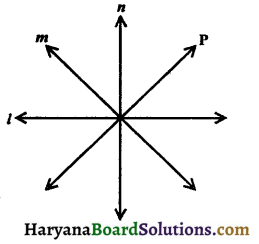 (x) Congruence of line segment: If the given two line segments are of the same size, they are said to be ‘congruent. Two lines AB and CD are congruent, if the trace copy of one can be superposed on the other so as to cover it completely and exactly.
Symbolically, \(\bar{AB}\) ≅ \(\bar{CD}\) or line segment AB ≅ line segment CD.

Equivalent Versions of Euclid’s Fifth Postulate:
There are several equivalent versions of fifth postulate of Euclid. One of them is ‘Playfair’s Axiom’ (given by Scottish mathematician John Playfair in 1729), as stated below: 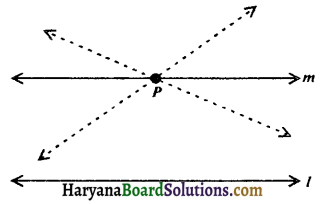 This result can also be stated as: Two distinct intersecting lines cannot be parallel to the same line.