Question 1.
A Mendelian experiment consisted of breeding tall pea plants bearing violet flowers with short pea plants bearing white flowers. The progeny all bore violet flowers, but almost half of them were short. This suggests that the genetic make-up of the tall parent can be depicted as …………………
(a) TTWW
(b) TTww
(c) TtWW
(d) TtWw
Answer:
(c) TtWW

Question 4.
A study found that children with light-coloured eyes are likely to have parents with light – coloured eyes. On this basis, can we say anything about whether the light eye colour trait is dominant or recessive? Why or why not?
Answer:

Reason:
1. No, the given information is not enough to consider the dominance or recessiveness of eye colour.

Question 5.
How are the areas of study – evolution and classification – interlinked?
Answer:
1. In classification, the groups of organisms are based on the similarities and differences of characteristics of the organisms.

3. In evolution, a study of identifying hierarchies of characteristics between the species is done. So, in such studies small groups of species with recent common ancestors are formed. Thus, the areas of study – evolution and classification are interlinked.

2. First of all the homozygous/pure parents with opposite characters are fertilized. Thus, applying Mendelian’s law, in the above case, the black coloured coat is a dominant character. So, black coat is dominant trait in dog. 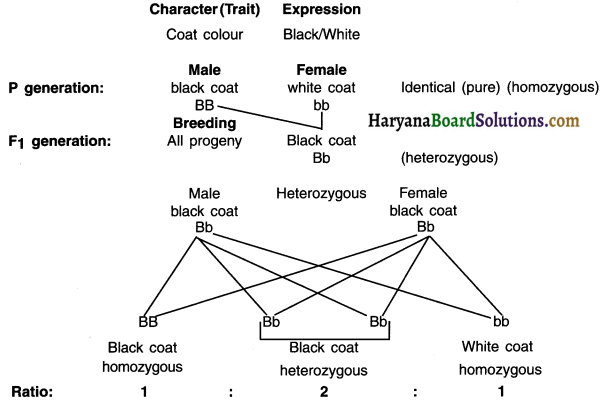 Question 8.
Explain the importance of fossils in deciding evolutionary relationships.
Answer:
1. The remains of dead organisms buried under the earth for millions of years are known as fossils.
2. Fossils are impressions of dead plants or animals that lived in the past.
3. When plants or animals die, the micro-organisms get decomposed in the presence of moisture and oxygen.
4. However, sometimes due to environmental conditions, their bodies do not decompose completely.
5. Such body parts of the plants and animals become fossil and can be available on digging the earth.
6. Fossils can be in the form of imprints, burrow of a worm, or even an actual bone.

Question 9.
What evidence do we have for the origin of life from inanimate matter?
Answer:
1. It is believed that life must have developed from simple inorganic molecules which were present on earth soon after it was formed.
2. It was also speculated that the conditions on earth at that time could have given rise to more complex organic molecules that were necessary for life.
3. It is believed that the first primitive organisms would have arisen from further chemical synthesis.

(2) Second, during the formation of gametes i.e. formation of sperms and ovum, the cell undergoes cell division phase called meiosis.

Question 12.
Only variations that confer an advantage to an individual organism will survive in a population. Do you agree with this statement? Why or why not?
Answer:
Yes, this is true.

2. Different individuals gain different types of advantages with these variations. Several variations enable the individual to adapt to the environmental conditions. This increases the chances of their survival.

3. The individuals that survive then reproduce offspring and the existence of species remains continued.

Question 1.
How do Mendel’s experiments show that traits may be dominant or recessive?
Answer:
1. Mendel conducted cross fertilization between pure tall plants (TT) and pure short (tt) plant. This resulted in all (Tt) plants in F1 generation.

2. This shows that single copy of T is enough to make the plant tall. The trait that gets expressed over the other is called the dominant trait and the other recessive.

2. On the basis of this experiment we can say that even though the F1 progeny plants were dominant in both the characters, the F2 progeny showed the new combinations. In F2 progeny plants some were tall and wrinkled, while some were short and round.

3. The experiment clearly shows that the factors that control the shape, size and height of the seeds are inherited independently and that is the main reason why new combinations could be seen in F2 generation.

Question 3.
Why are the small numbers of surviving tigers a cause of worry from the point of view of genetics?
Answer:
1. A small population generally does not show much variation from generation to generation.
2. A very small population of surviving tigers indicates that very less amount of variation will occur in the genetic characteristics. This means they will not be able to adapt to the major environmental changes if any, in the future.
3. The tigers will not survive and the species will become extinct.

2. For example, the basic design of internal structure of bones of forelimbs of a frog, lizard, bird, bat and man is same, even though these organs perform different functions.

3. This indicates that all these forelimbs have evolved from a common ancestral animal, which had a same basic internal structure.

Reason:
Although the wings of a butterfly and the wings of a bat perform similar function, but the design, structure and components of their wings are very different. Hence, the wings of these two can be considered as analogous organs and not homologous.

Question 3.
What are fossils? What do they tell us about the process of evolution?
Answer:
1. The remains of dead organisms buried under the earth for millions of years are known as fossils.
2. Fossils are impressions of dead plants or animals that lived in the past.
3. When plants or animals die, the micro-organisms get decomposed in the presence of moisture and oxygen.
4. However, sometimes due to environmental conditions, their bodies do not decompose completely.
5. Such body parts of the plants and animals become fossil and can be available on digging the earth.
6. Fossils can be in the form of imprints, burrow of a worm, or even an actual bone.

2. Initially, human race was identified on the basis of skin colour and the humans were known as yellow, black, white or brown. However, in the recent years, it has been proved that all the human beings have evolved from a single species called the Homo sapiens.

3. Hence, in spite of having different skin colour, looks and size, we all belong to the same species.

Aim: To study inheritance in the type of earlobes.

Observation:
We can observe that more number of students have inherited the trait of ‘free earlobes’ i.e. trait F as compared to attached earlobes i.e. A.

Conclusion:
From studies it has been proved that free earlobe is a dominant trait whereas an attached earlobe is a recessive trait.

In Fig. 9.3 of textbook, what experiment would we do to confirm that the F2 generation did in fact have a 1:2:1 ratio of TT, it and tt trait combinations?

Observation:
Although the experiment phenotypically shows the ratio of 3 : 1 ratio between tall and dwarf, genetically the ratio is 1 : 2 : 1.
This can be proved by the following experiment. We can raise F3 generation by allowing self-pollination of F3 generation plants.

Then we may calculate ratio for —

Observing the data carefully, one can find the appearance of 1 : 2 : 1 ratio of TT Tt and tt trait combination in F3 generation (also known as genotypic ratio).