What Happens when Metals are Burnt in Air:

Reaction of Metals will, Acids

Reaction of Metals with Solutions of Other Metal Salts

Activity (reactivity) series: The arrangement of metals in decreasing order of their reactivities is called the activity or reactivity series of metals. 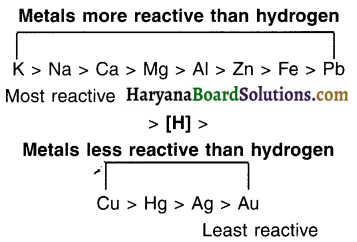 Information that we get from reactivity series of metals:

How do Metals and Non-metals React

Chemical bond : The phenomenon through which atoms of a molecule of a compound attract each other and combine is known as a chemical bond.

Chemical bonds are of two types. They are:

Mineral:
The elements or compounds that occur naturally in the earth’s crust are called minerals. Sea-water also contains salts of metals such as sodium chloride, magnesium chloride, etc.

Ores:
Those minerals from which the metals can be extracted, conveniently and profitably are called ores.

Gangue:
Impurities such as sand, mud, etc. present in the ore are called gangue.

Metal occur in the earth in the following forms:

Steps Involved in extracting metal from its ore:

Corrosion: The erosion reaction that takes place between a metal and water or moisture when they come in contact with each other is called metallic erosion or corrosion.

Ways to prevent corrosion of iron: