Introduction
We have studied about trigonometric ratios in earlier classes. In this chapter, we shall use the trigonometric ratios, to solve the problems regarding the heights and distances of various objects. Two common terms used in this chapter are angle of elevation and angle of depression.
1. Elevation: The height to which something is raised above a point of reference.
2. Depression: The depth to which something is lowered below a point of reference.
3. Line of sight: The line drawn from the eye of an observer to the point in the object viewed by the observer.
4. Complementary angles: Two angles having a sum of 90°, are called complementary angles.

Heights and Distances
Angle of Elevation: If a person is looking up at an object, the acute angle measured from the horizontal level to the line of sight when the object being viewed is called the angle of elevation. Here 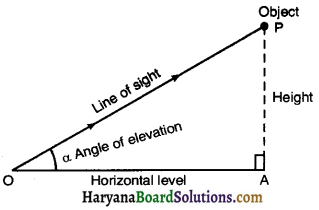 O is the point of observation, P is the position of the object, OP is the line of sight. OA is horizontal level and α is the angle of elevation. 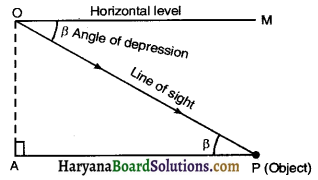