Introduction
In previous classes, we have studied about various plane figures such as squares, rectangles, triangles, quadrilaterals etc. We have also learnt the formula for finding the areas and the perimeters of these figures like rectangle, square, triangle etc. as given below:
1. Triangle :
(i) \(\frac{1}{2}\) × Base × Height
\(\frac{1}{2}\) × BC × AD
(ii) Perimeter = sum of the sides of a triangle
= AB + BC + CA 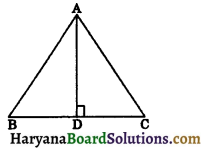 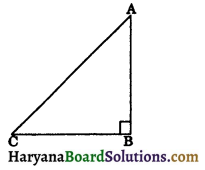 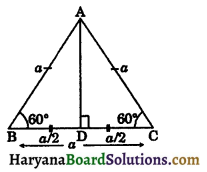 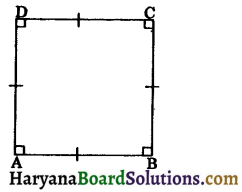 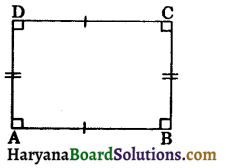 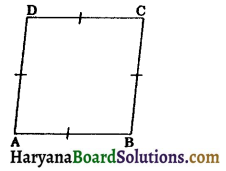 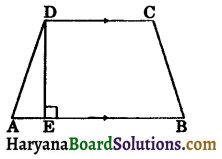 Key Words
→ Area: The area of a triangle or a polygon is the measure of the surface enclosed by its sides.

→ Perimeter: The perimeter of a plane figure is the length of its boundary.
OR
A perimeter is the sum of lengths of sides of a polygon.

→ Quadrilateral: A plane figure bounded by four line segments is called a quadrilateral.

→ Parallelogram: A quadrilateral in which opposite sides are parallel and equal is known as a parallelogram.

→ Square: A quadrilateral whose each angle is 90° and all sides are equal to each other is known as a square.

→ Rectangle: A quadrilateral each of whose angles is 90° is called a rectangle.

→ Rhombus: A quadrilateral having all the four sides equal is called a rhombus.

→ Trapezium: A quadrilateral in which one pair of opposite sides are parallel is called a trapezium.

→ Diagonal: A line joining any two vertices of a polygon that are not connected by an edge and which does not go outside the polygon.

Basic Concepts
Area of a Triangle by Heron’s Formula: Heron was born in about 10 AD possibly in Alexandria in Egypt. He worked in applied mathematics and wrote three books on mensuration. Book I deals with the area of rectangles, squares, triangles, trapezia, various other specialized quadri- laterals, regular polygons, circles, surfaces of cylinders, cones and spheres etc.

Application of Heron’s Formula in Finding Areas of Quadrilaterals: In this section, we have studied the areas of such figures which are the shape of a quadrilaterals. We need to divide the quadrilateral in two triangles and then use the formula 12.25 area of the triangle.