Question 2.
What are the advantages to foreign companies in setting up production in India?
Answer:
(i) They get cheap labourers or workers in India.
(ii) Since India has the second largest population country, there is a very vast internal market of foreign goods available in India.
(iii) India’s geographical conditions are favourable. India is linked to many other countries of the world. The companies, can export their goods to major markets of the world.

Question 3.
Do you think the victims of the Bhopal gas tragedy got justice?
Answer:
The victims of Bhopal Gas Tragedy have not got justice even after 28 years of Bhopal Gas Tragedy on December 2,1984. Even today 50,000 people are too sick to work. Many of them have developed severe respiratory disorders, eye-problems and other disorders. Even today many factories, workshops mines are running wihout proper safety measures.

Question 5.
How can laws ensure that markets work in a manner that is fair? Give two examples to support your answer.
Answer:
(i) Laws should ensure that business men use ISI marked balance, weights or measurements.
(ii) The products especially the medicines and eatables should have MRP (Maximum Retail Price) and expiry date marked on them.
It is through laws that the markets are regulated and the relation between workers, consumers and producers are not allowed to become explosive.

Question 6.
Imagine yourself to be a worker working in a chemical factory, which has received orders from the government to move to a different site 100 km away from the present location. Write about how your life would change.
Answer:
(a) I will have to shift my family.
(b) I will have to give ‘change of address’ notice for my bank and other legal documents.
(c) I will have to change the school of my children. If they don’t get a good school, their studies will suffer.

Question 8.
What are the source of environment pollution in your area? Discuss with respect to: (a) air (6) water (c) soil. What are the steps being taken to reduce the pollution. Can you suggest some other measures?
Answer:
(i) The sources of environment pollution in our area are:
(a) Air is being polluted from smoke coming from factories, chimneys.
(b) Smoke from petrol and diesel vehicles also pollute the air.
(c) Water-pollution is caused by dirt, chemical fertilizers and garbage from factories, farms and houses.
(d) Humans wastes, and dirt from factories pollute the soil.

(iii) Other suggestions:
Laws alone cannot make the environment clean. It is the people and every individual who is responsible and should take voluntary actions to
minimise pollution.

Question 10.
What do you think the famous Cartoonist R.K. Laxman is trying to convey in this cartoon? How does it relate to the 2006 law that you read on page 125. 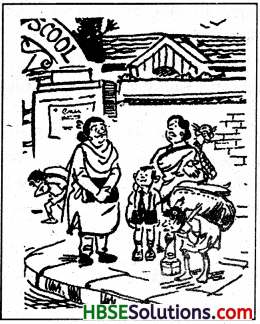 Answer:
(i) I think the famous cartoonist is trying to draw our attention towards child-labour. In the cartoon, a rich woman hires another child to lessen the burden of heavy school-bag on her child’s shoulders.
(ii) The law of 2006, is an amendment to the Child Labour and Prevention Act, which bans children under 14 years of age from working as domestic servants or as workers in dhabas, restaurants, tea-shops etc.

Question 11.
You have read about the Bhopal gas tragedy and the on-going struggle. Students from countries across the world have come together to support this struggle for justice. From protest marches to awareness campaigns, you can read about their activities on the website www.studentsforbhopal.com. The website also has resources such as photos, posters, documentaries, victims’ statements, etc.

Use this and other sources to make a wallpaper/exhibition on the’ Bhopal tragedy for your classroom. Invite the whole school to see and talk about it.
Answer:
It is a classroom activity. Do yourself

Question 1.
Why are law made to protect the interest of producers and consumers in the market?
Answer:
To ensure that the relations between the workers, consumer and producer are governed in a manner that is not exploitative.

Question 3.
Was Bhopal Gas Tragedy an accident? If not why?
Answer:
Bhopal Gas Tragedy was not an accident Union Carbide had deliberately ignored the essential safety measures in order to cut costs. Much before the Bhopal disaster, there had been incidents of gas leakage killing a worker and injuring several people.

Question 1.
Describe the Bhopal Gas Tragedy and the havoc caused by it.
Answer:
Union Carbide was an American Company located in Bhopal city in Madhya Pradesh where it produced pesticides. On December 2, 1884, a poisonous gas-Methyl-Isocyanite started leaking from this plant. The gas took no time to spread and the people settled in nearby areas started having breathing problems with in three days more than 8000 people died and hundreds of thousands were suffering different diseases. The people who survived developed many problems like respiratory problems, eye problems and other disorders. People became too sick and handicapped to work.

The tragedy occurred due to:
(i) Ignoring safety measures in order to cut costs.
(ii) Relaxation in enforcement of laws.
To make the matters worse; only 470 million was given as compensation as against 3 billion demanded by the court.

(A) Look at the given picutres and answer the following questions: 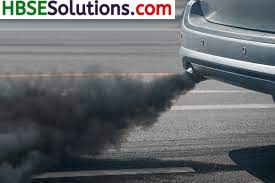