Question 1.
I am confused. What do we call the Indian government? Is it Union, Federal or Central?
Answer:
India is a ‘Union of States’. Indian administrative system is ‘Federal’. The government at centre is known as the ‘Central Government’.

Question 2.
If Federalism works only in big countries, why did Belgium adopt it?
Answer:
Belgium is a small country, but it is full of diversities based on ethnicity. To avoid conflict and political unstability, Belgium adopted the federal type of government.

Let Us Revise based Question (Page 16)

Question 3.
Some Nepalese citizens were discussing the proposals on the adoption of federalism in their new constitution. This is what some of them said
Khag Raj: I don’t like federalism. It would lead to reservation of seats for different caste groups as in India.
Sarita: Ours is not a very big country. We don’t need federalism.
Babu Lai: I am hopeful that the Terai areas will get more autonomy if they get their own state government.
Ram Ganesh: I like federalism because it will mean that powers that were earlier enjoyed by the king will now be exercised by our elected representatives. If you were participating in this conversation what would be your response to each of these? Which of these reflect a wrong understanding of what federalism is? What makes India a federal country?
Answer:
Reply to Khag Raj: You are right to some extent, but whatever facilities are being provided to various castes, those facilities are their rights. They were deprived of those rights. Federalism is successful if it is based on mutual trust.

Reply to Sarita: It is not essential, that a country should be big for federalism. A small country, like Belgium, has also adopted federalism. This system gives representation in power to all the people.

Reply to Babu Lai: This system should not be applicable only in Terai areas, but in the whole country, so that everyone may get an opportunity to participate. Reply to Ram Ganesh: I agree with your views because the public is the source of power in Federalism. For administration, the people elect their representatives.

The views of Khag Raj and Ram Ganesh reflect a wrong understanding of federalism. The division of powers between a three-tier government, written and rigid constitution, an independent judiciary and of course, an independent Election Commission makes India, a Federal country.

Question 4.
Isn’t that strange? Did our constitution makers not know about federalism? Or did they wish to avoid talking about it?
Answer:
No, it is not strange. Our constitution makers knew about federalism but at that time, our democracy was at its initial stage. If at that time, the states were given the federal rights, the country might have disintegrated. They planned to introduce changes through amendments with the strengthening of democracy.

Let Us Revise based Questions (Page 18)

(ii) Suppose the Government of Sikkim plans to introduce new textbooks in its schools. But the Union Government does not like the style and content of the new textbooks. In that case, does the State government need to take permission from the Union Government before these textbooks can be launched?
Answer:
In our constitution, education comes under concurrent list for which both the union and states can make laws. So, Sikkim goverment has its right to launch a now textbook whether it is liked by the Central Government or not. Sikkim Government does not need prior permission of union movement. But if there is any controversy regarding the content of the book which can effect our national interest, then the union government can intervene.

(iii) Suppose the Chief Ministers of Andhra Pradesh, Chhattisgarh and Odisha have different policies on how their state police should respond to the Naxalites. Can the Prime Minister of India intervene and pass an order that all the Chief Ministers will have to obey?
Answer:
In our constitution, police matters come under state list and the police has the responsibility to maintain law and order in the state. So, the chief ministers of Andhra Pradesh, Chhattisgarh and Odisha have full right to manage the law and order situation in their states in response to Naxalism.
The Prime minister of India cannot force the state to obey his order on police matters. But both union and state governments cannot ignore the problems of Naxalism. So it will be better that different state governments along with union government comes together and form a common policy to tackle this problem.

(ii) Can you identify any three States whose names in 1947 have changed later?
Answer:
(a) Rajasthan was part of ‘Rajputana’.
(b) Punjab was the part of ‘North-West Province’.
(c) Madhya Pradesh was known as ‘Central Province’.

Question 9.
Why Hindi? Why not Bangla or Telugu?
Answer:
‘Hindi’ and ‘English’ have been declared as the official languages by our Constitution. But, the people of non-Hindi areas are free to choose their official language.

Question 11.
Here are two cartoons showing the relationship between the Centre and States. Should the State go to the Centre with a begging bowl? How can the leader of a coalition keep the partners of government satisfied?
Answer:
No, the State should not demand more powers from the Centre. The leader of a Coalition Government can keep the partners of government satisfied by giving them a place in government and by taking their advice while deciding on any proposal.

Prime Minister runs the country. Chief Minister runs the state. Logically, then the chairperson of Zila Parishad should run the district. Why does the D.M. or Collector administer the district?
Answer:
The administration of the district cannot be given to the chairperson of Zila Parishad because, if they are given that right, every district will have its own policies and laws, which will result in confusion and chaos. That’s why, to prevent this administrative confusion and chaos, D.M. or Collector runs the district according to the policies of state government. This maintains order in the system.

What do these newspaper clippings (as presented in the picture) have to say about efforts of decentralisation in India ?
Answer:
There is a news related to Panchayats in these clippings. These express the participation of women in politics. Justice is easy and cheap. The finance is given by the Centre, directly to Panchayats, for development. 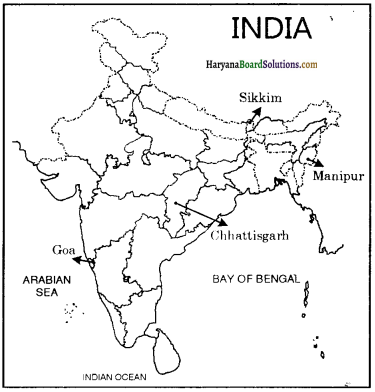 Question 2.
Identify and shade three federal countries (other than India) on a blank outline political map of the world.
Answer: 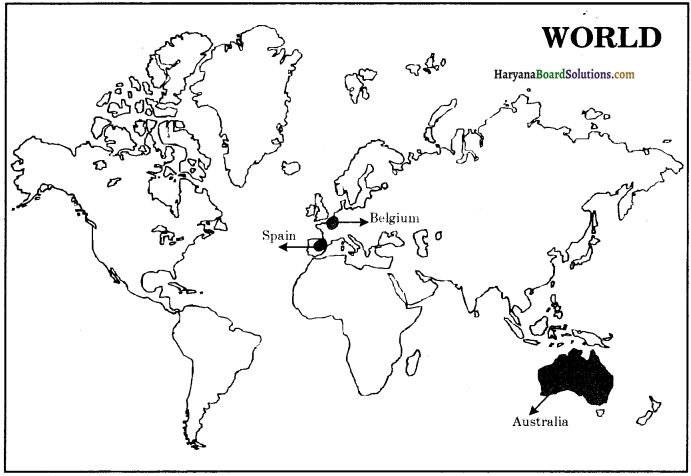 Question 3.
Point out one feature in the practice of federalism in India that is similar to and one feature that is different from that of Belgium.
Answer:
Similar feature: Belgium and India both, are Federal countries. Both have a three-tier government.
Different feature: At third tier (or level) Belgium has community government while India has local self-government.

Question 4.
What is the main difference between a federal form of government and a unitary one? Explain with an example.
Answer:
In a Federal form of Government as in India, the powers are divided between a Central Government and the various constituent units of the country. While in a unitary form of government, the National (Central) Government has all the powers. Any constitutional powers given to the states of the country are dependent on the national government, which can withdraw them at any time. Sri Lanka is one such example.

Question 6.
Fill in the blanks :
Since the United States is a …………….. type of federation, all the constituent states
have equal powers and states are ………….. vis-a-vis the federal government. But
India is a …………… type of federation and some States have more power than others.
In India, the …………… government has more powers.
Answer:
1. coming together
2. stronger
3. holding together
4. central.

Question 7.
Here are three reactions to the language policy followed in India. Give an argument and an example to support any of these positions.
Sangeeta: The policy of accommodation has strengthened national unity.
Arman: The language-based States have divided us by making everyone conscious of their language.
Harish: This policy has only helped to consolidate the dominance of English over all other languages.
Answer:
I would support the reaction of Sangeeta because it is true that the accommodation policy has strengthened our National Unity. An example is the case of the English language. According to the Constitution, the use of the English language for official purposes was to stop in 1965. But, many non-Hindi-speaking states demanded that the use of the English language should be continued. The Central Government agreed to continue the use of English along with the Hindi language for official purposes. Such flexibility shown by the Central Government of India, helped our country to avoid the conflict that is being faced by Sri Lanka.

Question 9.
A few subjects in various Lists of the Indian Constitution are given here. Group them under the Union, State and Concurrent lists as provided in the table below:
(A) Defence
(B) Police
(C) Agriculture
(D) Education
(E) Banking
(F) Forests
(G) Communications
(H) Trade
(I) Marriages
Answer:

Question 11.
Match List I with List II and select the correct answer using the codes given below the lists: