Introduction
In previous classes, we have learnt about triangles and their various properties. Recall that, a closed figure formed by three line segments, is called a triangle. It is usually denoted by the greek letter Δ (delta).

The figure 7.1 shows a triangle ABC denoted as a ΔABC. A triangle has three sides namely AB, BC and CA, three vertices namely A, B and C and has three angles namely ∠A, ∠B and ∠C. 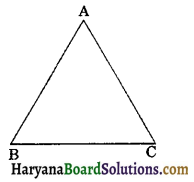 Key Words
→ Equalities: The logical relation expressing identity or sameness and denoted by the sign “=”.

→ Axiom: A statement whose truth is either to be taken as self evident or to be assumed.

→ Inequalities: Refers to a statement that a quantity is either greater than or less than but not equal to them.

→ Perimeter: The perimeter of a two dimensional region is the length of its boundary.

→ Concentrate: On one point, to pay attention upon.

→ Slides: A gliding seat or surface for sliding.

→ Swing: To move with to and fro motion.

→ Hexagon: It is a polygon bounded by six straight line. (six-sided figure).

Basic Concepts
1. (a) Definition of Congruence: If two geometrical figures coincide exactly, by placing one over the other, the figures are said to be congruent to each other.
(i) Two line segments are congruent if and only if their lengths are equal. (See fig. 7.2).

(ii) Two angles are congruent if and only if their measures are equal. (See fig. 7-3)

Two angles ABC and PQR are congruent if m∠ABC = m∠PQR.

(iii) Two circles are congruent if and only if lengths of their radii are equal. (See fig. 7.4)

(iv) Two squares are congruent if and only if they have equal sides in length. (See fig. 7.5) 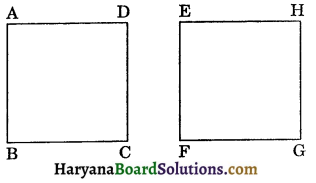 (b) Congruence of Triangles: The three sides and three angles of a triangle are called its six parts or six elements. Two triangles are said to be congruent to each other, if on placing one over the other, they exactly coincide.

To prove : ΔABC ≅ ΔDEF.
Proof: Place ΔABC over ΔDEF such that vertex A falls on vertex D and side AB falls on side DE. Since side AB side DE. Therefore vertex B falls on vertex E. Since ∠A = ∠D, therefore AC will fall on DF.
But AC = DF and A falls on D.
∴ C will fall on F.
Thus AC will coincide with DF.
Now B falls on E and C falls on F.
∴ BC will coincide with EF.
∴ ΔABC coincide with ΔDEF.
Hence, by definition of congruence ΔABC ≅ ΔDEF.
Note: (1) This axiom refers two sides and the angle between them so it is known as (side-angle-side) or the “SAS congruence axiom” or the “SAS” criteria

Case II: Let if possible AB > DE, so we can take a point P on AB such that PB = DE. Now consider ΔPBC and ΔDEF.

Case III: If AB < DE, we can choose a point M on DE such that ME = AB and repeating the arguments as given in Case (II), we can conclude that AB = DE and so we can prove that

Corollary (AAS congruence rule):
If any two angles and non-included side of one triangle are equal to the corresponding angles and side of another triangle, then two triangles are congruent.
Given: Two triangles ABC and DEF, such that
∠A = ∠D, ∠B = ∠E
and BC = EF.
To prove : ΔABC ≅ ΔDEF
Proof: Since, we know that sum of the interior angles of a triangle is 180°. 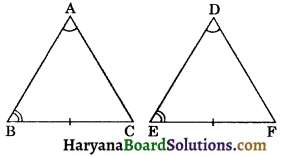 Some Properties of a Triangle: In chapter 6 we have studied the triangle and their kinds. Recall that, if a triangle has two sides equal, then it is called an isosceles triangle. Now we shall study some results related to isosceles triangles.

Theorem 7.2:
Angles opposite to equal
Given: In ΔABC, AB = AC.
To prove: ∠B = ∠C. sides of an isosceles triangle are equal. 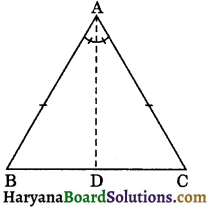 Construction: Draw AD, the bisector of ∠A which meets BC on D.
Proof: In ΔABD and ΔACD, we have
AB = AC, (Given)
∠BAD = ∠CAD, (By construction)
and AD = AD, (Common)
ΔABD ≅ ΔACD,
(By SAS congruence rule)
⇒ ∠B = ∠C. Hence proved. 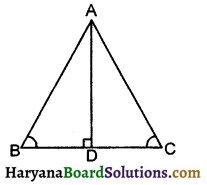 Some More Criteria for Congruence of Triangles :
Theorem 7.4 (SSS congruence rule): If three sides of one triangle are equal to the three sides of another triangle, then two triangles are congruent.
Given: ΔABC and ΔPQR such that AB = PQ, BC = QR and AC = PR.
To prove : ΔABC = ΔPQR. 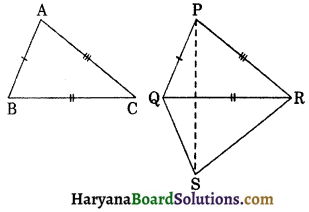 Inequalities in a Triangle: In this section, we shall learn about some inequality relations among sides and angles of a triangle. Consider scalene triangle ΔABC such that AB = 7 cm, BC = 6 cm and AC = 5 cm. Now measure the three angles A, B and C with the help of protector, we observe that: 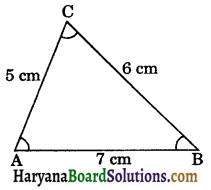 Theorem 7.6:
If two sides of a triangle are unequal, the angle opposite to the longer side is larger or (greater). (See fig. 7.62) 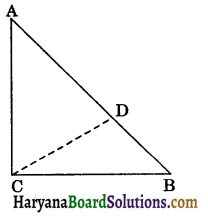 Theorem 7.7:
In any triangle, the side opposite to the larger (greater) angle is longer.
Given: A triangle ABC in which ∠ABC > ∠ACB.
To prove: AC > AB. 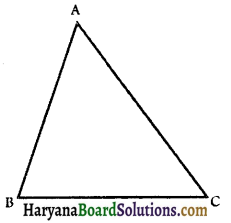 Proof: There are following possibilities.
(i) AC = AB
(ii) AC < AB
(iii) AC > AB
There is only one possibilities must be true.
(i) If AC = AB
⇒ ∠ABC = ∠ACB
[Angles opposite to equal sides are equal]
It is impossible, for it is given that
⇒ ∠ABC > ∠ACB
(ii) If AC < AB
⇒ AB>AC
⇒ ∠ACB > ∠ABC
This is also impossible, being contrary to hypothesis.
(iii) Since AC is neither less than nor equal to AB.
∴ AC must > AB.
Hence AC > AB. Proved. 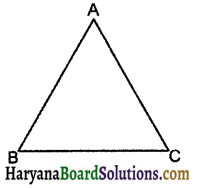 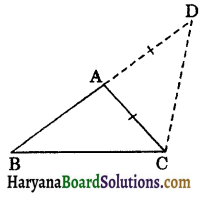 Corollary 1.
The difference between the lengths of any two sides of a triangle is always less than the third side.