Question 4.
How was the Mahalwari system different from the permanent Settlement?
Answer:

For the government Mahalwari ssytem was an improvement over the Permanent settlement.

Question 5.
Give two problems which arose with the new Munro system of fixing revenue.
Answer:
The problems created by the Munro system of fixing revenues were :
(i) Driven by the desire to increase the income from land, revenue officials (Captain Alexander Read and Thomas Munro) fixed too high a revenue demand. Peasants were unable to pay, ryots fled the countryside, and villagers became deserted in several areas.

(ii) Optimistic officials had imagined that the new system would transform the peasants into rich enterprising farmers. But this did not happen.

(b) Indigo could be cultivated only on fertile lands, and these were all already densely populated.

(c) Peasants who were initially tempted by the loans soon realised how harsh the system was. The price they got for the indigo they produced was very low and the cycle of loans never ended.

(d) The planters usually insisted that indigo be cultivated on the best soils in which peasants preferred to cultivate rice.

(e) Indigo had deep roots and it exhausted the soil rapidly. After an indigo harvest the land could not be sown with rice.

Question 7.
What were the circumstances which led to the evenual collapse of indigo production in Bengal?
Answer:
(i) In March 1859, thousands of ryots in Bengal refused to grow indigo. As the rebellion spread, ryots refused to pay rents to the planters and attacked indigo factories armed with swords and spears, bows and arrows.

(ii) Ryotes swore they would no longer take advances to sow indigo nor be bullied by the planter’s lathiyals.

(iii) The government set-up the Indigo Commission to enquire into the system of indigo production. The Commission held the planters guilty and criticised them for the corecive methods they used with indigo cultivators.

(iv) The Indigo Commission declared that indigo production was not profitable for ryots. The Commission asked the ryots to fulfil their existing contracts but also told them that they could refuse to produce indigo in future.

Question 8.
Find out more about the Champaran Movement and Mahatma Gandhi’s role in it.
Answer:
When the indigo production collapsed in Bengal, the European planters of indigo shifted their operations to Bihar. When Mahatma Gandhi returned from South Africa, a peasant from Bihar persuaded him to visit Champaran and see the plight of the indigo cultivators there.

Role of Mahatma Gandhi : Mahatma Gandhi’s visit in 1917 marked the beginning of the Champaran movement against the indigo planters. The European planters oppressed the peasants. Gandhiji reached Champaran in 1917 to witness the miserable conditions of the peasants. The district officials ordered him to leave Champaran but he refused to comply the orders and started the Satyagraha.

Imagine a conversation between a planter and a peasant who is being forced to grow indigo. What reasons would the planter give to persuade the peasant ? What problems would the peasant point out ? Enact their conversation.
Answer:
Hints : (i) Why are you forcing me to sign the contract?

(ii) Contract should be done on mutual terms and conditions. These should be useful to peasant also. I should get enough amount of money as a salary for my labour and for the work of my other family members.

(iii) I require a reasonably good house to live in. There should be a hospital for the workers. All medical facilities should be provided to the labourers. There should be a school, where my children could go to take education. My duty hours should be fixed. On every Saturday should be paid my salary as well as extra allowances for my work.

Land tax should be charged from Zamindars directly. Otherwise, I am not willing to sow indigo. If you or your agent agree with my terms I will work only for one or two crops. For next period new and more favourable terms and conditions should be settled. The cost of production should be decided and settled with mutual consultation.

Question 1.
What did the Company have to do as Diwan?
Answer:
As Diwan, the Company became the chief financial administrator of the territory under its control. Now it had to think of administering the land and organising its revenue resources.

Question 3.
What were the consequences of 1770 famine in Bengal?
Answer:
In the terrible famine of 1770, ten million people were killed in Bengal. About one- third of the population was wiped out.

Question 7.
Why did cloth dyers prefer indigo to woad as dye?
Answer:
Cloth dyers preferred indigo as a dye because indigo produced a rich colour whereas the dye from woad was pale and dull.

Question 8.
Who were Nabobs?
Answer:
In the 18th century the East India Company had given this name to its officials because they were following the life-style of the Indian customary.

Question 9.
From where was indigo produced?
Answer:
The rich blue colour or indigo was produced from a plant called indigo.

Question 12.
Where was indigo cultivation initiated in India?
Answer:
In Bengal province.

Question 13.
What was the impact of indigo cultivation on the soil?
Answer:
Indigo plants had deep roots and it exhausted the soil. After indigo harvest, the land could not be sown with rice.

Question 1.
Comment on the report of the Indigo Commission.
Answer:

Question 3.
Why did the cultivator find the system of Permanent Settlement oppressive?
Answer:
The cultivator found the system of Permanent Settlement oppressive because the rent he paid to the zamindar was high and his right on the land was insecure. To pay the rent he had to often take a loan from the money-lender, and when he failed to pay the rent he was evicted from the land he had cultivated for generations.

(b) The supplies could not be easily got from the peasants since their ploughs and bullocks were busy on their rice fields, exactly at the time that the indigo plants needed them.

Question 6.
Why did the demand of indigo increase by the end of the eighteenth century?
Answer:

That was why, the demand of indigo increased by the end of the eighteenth century.

Question 1.
Discuss how did the British East India Company becomes the Diwan?
Answer:
In order to maintain the expenses of both the administrative bodies and the army, it was necessary for the British to increase their financial resources. Apart from trade, the British now focused their attention on different sources of revenue.

During the governorship of Lord Clive in 1765, the Mughal Emperor, Shah Alam II granted the Diwani of Bengal, Bihar and Orissa to the East India Company. In return, the Company was to make an annual payment of ₹ 26 lakh to him.

(2) Ryotwari System : This system was introduced in parts of Madras and Bombay Presidencies. This system had the following features :

(3) Mahalwari System: This system derives its name from the word Mahal which means a village or an estate.
The salient features of the system were :

Question 3.
Discuss how the British people looked indigo cultivation as an opportunity.
Answer:

Question 1.
Look at the picture and answer the following questions :

(i) What is shown in the picture?
Answer:
A weekly market in Murshidabad in Bengal.

Question 2.
Look at the following picture and answer the questions that follow : 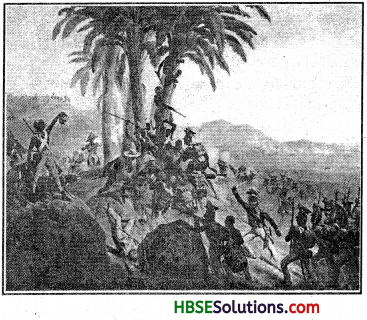 (i) What is shown in the picture?
Answer:
The Slave Revolt in St. Domingue, August 1791.

(ii) What did the African slaves do when they rose in rebellion in 1791?
Answer:
They burnt the plantations and killed their rich planters.