Question 1.
Do you think Kanta has enough reason to doubt whether she really is equal? List three reasons from the story above that might make her feel like this?
Answer:
Yes, the poverty of Kanta makes her feel that she is not equal. This is because of the following reasons:
(i) Kanta cannot take a day off from work when she needs to.
(ii) She cannot attend a good private hospital but has to attend a government hospital where most people standing are poor.
(iii) She lives in a dirty slum and not in a clean area. 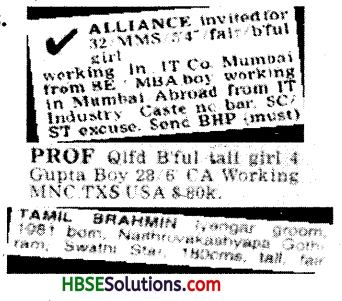 Circle the reference to caste in the matrimonial advertisements given above.
Answer:
(i) Caste no bar
(ii) Gupta Boy
(iii) Tamil Brahmin.

Question 4.
Why do you think the Ansaris were being treated unequally? What would you do if you were in the Ansari’s position and could not find a place to live because some people did not want to live next to you because of the religion you practice.
Answer:
Ansaris were being treated unequally becaqse of their national origin and the religion they practice. They were discriminated against because they belonged to a minority community. If I were in the Ansari’s place, I would have frankly stood out. If the landlord would not have given me the flat on this basis, I would havd narrated the lesson on values. I woulcj have made them understand how all religions lead to one God.

Question 5.
What is the mid-day meal programme? Can you list three benefits of the programme? How do you think this programme might help promote greater equality?
Answer:
(a) Mid-day meal refers to scheme introduced in all government elementary schools to provide children with cooked lunch. Its benefits are:
(i) Poor children have begun enrolling and regularly attending school.
(ii) With this scheme, a poor child’s mother does not have to interrupt work to feed the children at home.
(iii) The mid-day meal scheme also helps reduce the hunger of poor students who often come to school and cannot concentrate because their stomach is empty.

(b) It also helps reduce inequality in the following ways:
(i) It reduces caste prejudices because both lower and upper caste children in the school eat this meal together.
(ii) Dalit women have been employed to cook the meal.

Question 6.
If you were one of the Ansaris how would you have responded to the suggestion that you change your name?
Answer:
I would have vehemently refuted on the decision of changing my identity as that would mean shattering myself respect.

Question 1.
In a democracy why is universal adult franchise so important?
Answer:
All adults (18 years or above) have the right to vote in the Indian democracy. This aspect is important because it is based on the basic idea of equality. It states that every adult in the country irrespective of their wealth and communities he/she belongs to has one vote.

Question 2.
Re-read the box on Article 15 and state two ways in which the article addresses unequality.
1.The state shall not discriminate against any citizens on grounds only or religion, race, caste, sex, place of birth or any of them.
2. No citizen shall on grounds only of religion, race, caste, sex, place of birth or any of them be subject to any disability, liability, restriction or condition with regard to.
(a) Access to shops, public restaurants, hotels and places of entertainment.
Or
(b) The use of wells, tanks, bathing ghats, roads and places of public resort maintained wholly or partly out of state funds or dedicated to the use of general experience.
Answer:
There is discrimination in India on basis of sex, race, caste and religion. But our constitution prohibited all these discrimina¬tion. There are also some inequalities even today such.
(a) Gender discrimination.
(b) Discrimination on the basis of caste still prevail in many part of our country.

Question 3.
In what ways was Om Prakash Valmiki’s experience similar to that of the Ansaris?
Answer:
Both of them Om Prakash Valmiki and the Ansaris had to face inequality because of the race or caste they were born in. Both of them faced a violation of human dignity. While Valmiki had to sweep the grounds, Ansaris were no basis ignored when they sought a free apartment.

Question 4.
What do you understand by term, “all persons are equal before the law? Why do you think it is important in a democracy?
Answer:
The statement means that all persons should be treated equally and in the same manner, irrespective of religion, race, caste, gender, sex or any of them it is important. It hence recognises the dignity of all people. This means that every individual in the country including male or female persons from all castes, religions, tribes, educational and economic background as equal.

Look at the photographs and think about the boy who is being carried down the stairs. Do you think the above law is being implemented in his case? What needs to be done to make the building more accessible to him?
Answer:
The Disabilities Act in 1995 is not wholly implemented in the scene as the building is not feasiable for him to walk. Ramp facilities should be provided to the building 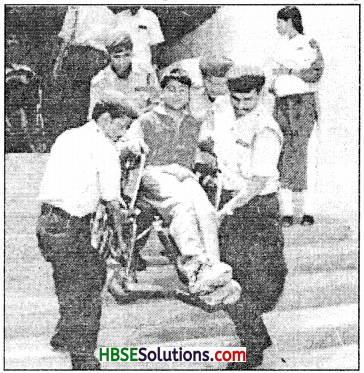 for a better view of its construction for disabled or specially abled students. Being carried by a wheelchair may- make him feel insecure. Not only this, it will also affect his security. He will not be given dignity as he would be recognised as unequal in the eyes of others.

Question 3.
What is ‘Joothan’?
Answer:
Joothan is an autobiography of a Dalit writer, Om Prakash Valmiki.

Question 1.
What two steps did the government take to implement the equality guaranteed in the constitution.
Answer:
(i) The first step that the government has taken to implement equality is through making the law. For example, there is a law made which declares untouchability as a crime in India.

(ii) Second, the government has set up schemes or programmes to help disadvantaged communities. For example, mid-day meal scheme has been implemented in all government elementary schools.

Question 3.
How does the government guarantee equality?
Answer:
Equality is guaranteed through:
(i) laws prescribed in the constitution
(ii) government programmes or schemes to the disadvantaged communities.

Question 4.
Explain in detail how laws and schemes have helped recognize equality.
Answer:
(i) There are several laws in India that protect every person’s right to be treated equally.
(ii) The government has also set up several schemes to improve the lives of communities and individuals who have been treated unequally for several centuries.-These schemes are to ensure greater opportunity from disadvantaged people.

Question 5.
When will people be stored treating as equal?
Answer:
When people begin to feel that no one is inferior and that every person deserves to be treated equally with dignity, people x’ would then start treating as equal.

Question 6.
What led to Civil Rights Movement?
Or
Explain in brief the defiant act by Rosa Parks.
Answer:
A refusal to give up her seat for a white man by Rosa Parks started a huge agitation against the unequal ways in which Africans-Americans were treated.

Question 1.
How were the African, Americans treated unequally in the United States of America?
Answer:
The African-Americans were treated unequally in a number of ways.
(i) For example, when travelling by bus, they either had to take the back seats in the bus or get up from their seats whenever a ; white person wished to sit.
(ii) African-American children were not admitted in schools in which white men’s children studied. They attended separate schools specially set up for them.

Question 2.
Lay down the provisions of the constitution that ensure equality.
Answer:
The recognition of equality includes some of the provisions in the constitution.
1. Every person is equal before the law. It means that every person; President or a domestic worker has to obey the same laws.
2. No person can be discriminated against on the basis of their religion, race, caste, place of birth or whether they are male or female.
3. Every person has access to all public places, including playgrounds, hotels, shops and markets. All persons can use publicity available wells, roads and the bathing ghats.
(iv) Untouchability has been abolished.

Question 3.
What is Universal Adult Franchise?
Answer:
1. Universal adult franchise is the essential condition for all democracies.
2. It gives all adult, irrespective of what religion they belong to, how much educated, what caste they are from or whether they are rich or poor, the right to vote.
3. It is based on the principle of equality, i.e., one person one vote, and one vote one value.

Question 4.
Describe the event in Rosa Park’s life what led. to Civil Rights Movement.
Answer:
1. Rosa Parks was an African-American woman.
2. Fixed after a long day at work, she refused to give up her seat on bus to a white man on 1 December 1955.
3. Her refusal that day started a huge agitation against the unequal ways in which African-Americans were treated. This led to the Civil Rights Movement.