Haryana Board 6th Class Science Solutions Chapter 15 Air Around Us

Now make several holes in one plastic bottle and cover the lighting candle with this bottle. We see that candle burns continuously. This candle gets air from different holes and burns continuously till it is completely finished. This activity shows that air supports burning.

Question 5.
Why does cotton lump get sunk T in water?
Answer:
Cotton lump contains air in it. There are various spaces in which air is filled. When cotton lump is put into water, air present in the vacant space dissolved in water and cotton lump sank.

Question 9.
How do plants and animals help each other in the exchange of gases in the atmosphere?
Answer:
Plants and animals help each other in exchange of gases. They are interdependent on each other. All the animals require oxygen for their survival. It helps breaking down digested food in the body and release energy. This process is called respiration. During respiration, carbon dioxide gas is produced.

Plants consume this carbon dioxide gas for preparing their own food and release oxygen. They also use some oxygen for respiration. This oxygen gas is used for animals in their respiration process. In this way, plants and animals help each other in the exchange of gases in the atmosphere.

Question 1.
Where do we get air?
Answer:
We get air from the atmosphere.

Question 2.
What is the use of air pressure?
Answer:
Air pressure is used in pumps.

Question 3.
The cover of air around the earth is called
Answer:
Atmosphere.

Question 7.
Which gas forms the largest part of the air?
Answer:
Nitrogen.

Question 9.
What is the use of nitrogen in air?
Answer:
Nitrogen slows down the process of combustion.

Question 12.
Which gas is released during photosynthesis?
Answer:
Oxygen gas.

Question 13.
Which gas is helpful for combustion?
Answer:
Oxygen gas.

Question 17.
Give the percentage composition of nitrogen and oxygen by volume in air.
Answer:
Nitrogen – 70% and oxygen – 21%.

Question 21.
Which component of the air is used in fire extinguishers?
Answer:
Carbon dioxide gas.

Question 22.
State one way in which air enters the air.
Answer:
Through respiration.

Question 23.
Why do we call neon and argon as inert gases?
Answer:
Because they do not react with any ; other element or compound in ordinary conditions.

Question 27.
Write two importances of air in agriculture.
Answer:
(i) Air helps rotate wind-mill which is used to draw water from tube-wells.
(ii) Air helps in dispersion of seeds and ; pollen grains of flowers of several plants.

Question 28.
Give one important use of .! nitrogen.
Answer:
Nitrogen is used in the manufacture of fertilizers.

Question 4.
Show that one-fifth volume of air is oxygen.
Answer:
Take a glass trough. Fill it about half with water. Add a few drops of ink to make the water coloured. Fix a candle on a solid iron rectangular block and place the block in water. Take a glass cylinder and mark it into five equal parts by passing a thin strip of paper at equal distance on its outer surface. Light the candle and invert the glass cylinder over it.

The flame of candle starts burning, then becomes and finally stops burning. Coloured water rises up in the glass cylinder and is filled one fifth with water. Thus one fifth of air is used in burning. Hence one fifth volume of air is oxygen.

Question 5.
How will you show that air contains water vapour?
Answer:
Put some ice blocks in a glass tumbler and keep it in the open air. Drops of water appear on the outer surface of glass tumbler after a few minutes. Air in contact with the tumbler gets cooled and the water vapour present in it condenses to give drops of water. 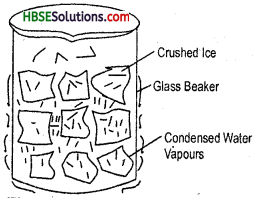 Thus we can see that water is present in air in the form of its vapours.

Question 6.
Explain why air is considered a mixture.
Answer:
Air is considered a mixture because:
(i) The composition of air varies from place to place and at depths and heights.
(ii) The constituents of air such as oxygen, nitrogen, carbon dioxide, water vapours etc. can be separated by simple physical methods.
(iii) The properties of air are the average of its constituents.
(iv) No energy is evolved or absorbed when various components of air (gases) are mixed to obtain air.

Question 7.
Mention five uses of air.
Answer:
Uses of air:
(i) Air is used by humans for respiration.
(ii) Air is necessary for burning.
(iii) Air is used for inflating the tyres of vehicles.
(iv) Balloons and balls can be used only when they are inflated with air.
(v) Compressed air is used in the break system for stopping trains.

Question 8.
How will you show that air is present in a lump of soil?
Answer:
Take a lump of dry soil in a beaker or glass tumbler. Adding water to it, we see that bubbles come out from the soil. This shows that soil contains air.

Question 12.
How do you know that solid particles are floating in air?
Answer:
Choose a sunny room in your home, now close all the doors and windows to make the room dark. Now open the window/door facing the sun just a little in such a way that it allows sunlight to enter the room only through a slit.

Invert a test tube filled with water on the stem of funnel so that air bubbles get in the test tube.

The divers and mountainears inhale oxygen from these cylinders so that they can breate easily. Therefore, they carry oxygen cylinders with them.

Question 1.
Point out different uses of air.
Answer:
Uses of various constituents of air:
1. Uses of Nitrogen:
(i) It helps to slow down the process of combustion.
(ii) It dilutes the concentration of air.
(iii) On a very large scale nitrogen is used for the manufacturer of ammonia, which is used to make fertilizers and nitric acid.
(iv) Due to inertness nitrogen is used to produce a blanketing atmosphere during the processing of food to prevent oxidation which causes food to spoil and affects the natural taste.
(v) Nitrogen is used with argon for filling electric lamps.
(vi) Nitrogen is used for making explosive such as TNT and nitro cellulose.

2. Uses of Oxygen:
(i) Without oxygen, animal life is not possible. It is used for breathing and respiration.
(ii) Mountaineers inhale oxygen at heights, where oxygen is thin, from the cylinders they carry on their backs.
(iii) Fish and other aquatic animals use dissolved oxygen for breathing and respiration.
(iv) It is used in hospitals in many diseases for artificial respiration.
(v) Oxygen with acetylene is used as oxy- acetylene torch as welding and cuttings.
(vi) Liquid oxygen is used as rocket fuels.

4. Uses of Inert gases:
(i) Inert gas argon is filled in bulbs for the protection of filament of the bulb.
(ii) Helium is used to obtain low temperature.
(iii) Neon is used in special electric bulbs called neon-signs.
(iv) Radon gas is used in the treatment of cancer.

Instead of is used in inflating vehicle tyres, such as cars, scooters and motor-cycles. It is used in compressed form for digging, mining and breaking stones in machines. It is used in drying process for agricultural products such as grains, pulses etc. Air current makes the wind-mill to rotate. Wind-mill is used to draw water from the wells and tube-wells. Air is used for sailing gliders and aircrafts. It also helps in dispersal of seeds.

Air around us Class 6  HBSE Notes