Question 1.
Which one of the following materials cannot be used to make a lens?
(a) Water
(b) Glass
(c) Plastic
(d) Clay
Answer:
(d) Clay

Question 8.
Name the type of mirror used in the following situations.
(a) Headlights of a car
(b) Side/rear-view mirror of a vehicle
(c) Solar furnace
Support your answer with reason.
Answer:
(a) Concave mirrors are used as reflectors in headlights of cars. When a bulb is located at the focus of the concave mirror, the light rays after reflection from the mirror travel over a large distance as a parallel beam of high intensity.

(b) A convex mirror is used as a side/rear-view mirror of a vehicle because of the following reasons:

The rays coming from the object get refracted by the upper half of the lens and meet at the other side of the lens to form the image. 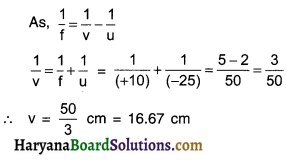 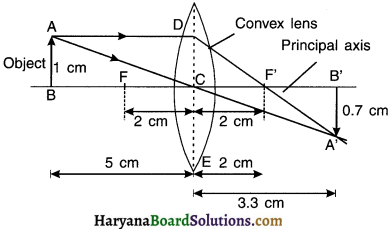 The negative (minus) sign shows that the image is inverted, real, diminished (3.3 cm). Figure 10.60 show the positive, size and nature of the image formed.

Object distance, u = – 30 cm.
The negative sign shows that the object is placed on the left side of the lens. 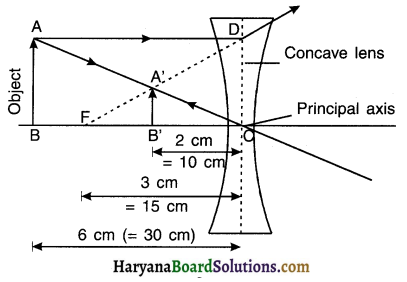 A virtual, erect image of height 2.2 cm is formed behind the mirror at a distance of 8.6 cm from the mirror.

Object distance, u = – 27 cm
image distance,v = ?
The screen should be placed at a distance of 54 cm on the object side of the mirror to obtain sharp image.

The image is real, inverted and enlarged in size.

Question 3.
Name a mirror that can give an erect and enlarged image of an object.
Answer:
Concave mirror

Question 4.
You are given kerosene, turpentine and water. In which of these does the light travel fastest? Use the information given In table 10.3 of the text book.
Answer:
For kerosene, n = 1. 44,   For turpentine oil, n = 1. 47,   For water, n = 1. 33
As water has lowest refractive index, so light travels fastest in this optically rarer medium compared to kerosene and turpentine oil.

Question 5.
The refractive index of diamond is 2.42. What is the meaning of this statement?
Answer:
It indicates that the ratio of speed of light in air to that in diamond is 2.42.

Question 2.
A convex lens forms a real and inverted image of a needle at a distance of 50 cm from it. Where is the needle placed ¡n front of the convex lens if the image is equal to the size of the object? Also, find the power of the lens.
Answer:
1. Here, image distance y = + 50 cm (∴ y is positive for real images)
2. As mentioned, the real image is of the same size as the object.

Thus, object (needle) is placed at 50 cm from the lens.

Aim: To study the formation of images by both sides of a large shining spoon.

Aim: To find the approximate focal length of a concave mirror.

Caution: Do not look at the sun directly or even Into a mirror reflecting sunlight. It may damage your eyes. 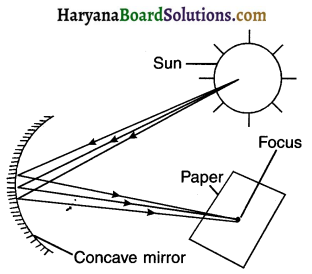 Question 1.
Hold the mirror and the paper in the same position for a few minutes. What do you observe? Why?
Answer:
Observation
Initially, the paper turns blackish and emits smoke while burning slowly. The paper then catches fire.

Aim: To locate the image formed by a concave mirror for different positions of the object.

3. Draw with a chalk two more lines parallel to the previous line such that the distance between any two successive lines is equal to the focal length of the mirror. These lines will correspond to the position of the points P, F and C, respectively.

4. Keep a bright object, say a burning candle, at a position far beyond C. Place a paper screen and move it in front of the
mirror till you obtain a sharp bright image of the candle flame on it.

5. Observe the image carefully. Note down its nature, position arid relative size with respect to the object size.

7. In one of the cases, you may not get the image on the screen. Identify the position of the object in such a case. Then, look for its virtual image in the mirror itself.

8. Note down and tabulate your observations.

Observation:
Table 1. Nature, size and position of Images formed by a concave mirror for different positions of the object

Students should do this activity on their own. Make use of activity 3 for drawing the diagrams.

Aim: To locate the image formed by a convex mirror for different positions of the object.

Take a convex mirror. Hold it in one hand. Hold a pencil in the upright position in the other hand. 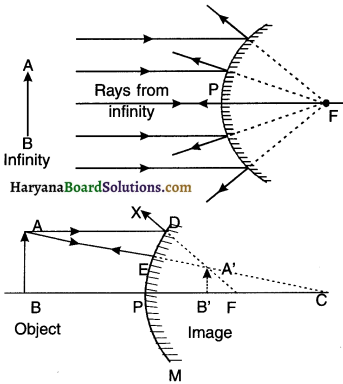 Question 1.
Observe the image of the pencil in the mirror. Is the image erect or inverted? Is it diminished or enlarged?
Answer:
The image is erect, diminished and virtual.

Question 2.
Move the pencil away from the mirror slowly. Does the image become smaller or larger?
Answer:
The image formed is smaller and erect.

Aim: To demonstrate that convex mirror has a wide field of view.

Question 4.
Now try using a convex mirror. Did you succeed? Explain your observations with reason.
Answer:
A full length image of the object is obtained in a small convex mirror.

Reasons for these observations:

Aim: To demonstrate refraction of light.

1. Place a coin at the bottom of a bucket filled with water.
2. With your eye to a side above water, try to pick up the coin in one go. Did you succeed in picking up the coin?
3. Repeat the activity. Why did you not succeed in doing in one go?
4. Ask your friends to do this. Compare your experience with theirs. 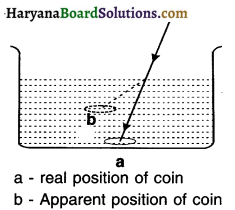 1. Place a large shallow bowl on a table and put a coin in it.
2. Move away slowly from the bowl. Stop when the coin just disappears from your sight.
3. Ask a friend to pour water gently into the bowl without disturbing the coin.
4. Keep looking for the coin from your position. Does the coin becomes visible again from your position? How could this happen?

1. Draw a thick straight line in ink, over a sheet of white paper placed on a table.
2. Place a glass slab over the line in such a way that one of its edges makes an angle with the line.

Question 2.
Next, place the glass slab such that it ¡s normal to the line. What do you observe now? Does the part of the line under the glass slab appear bent?
Answer:
Now, the line does not appear bent. The reason for this is that the light rays incident normally at the glass and air do not undergo refraction.

1. Fix a sheet of white paper on a drawing board using drawing pins.
2. Place a rectangular glåss slab over the sheet in the middle.
3. Draw the outline of the slab with a pencil. Let us name the outline as ABCO.
4. Take four identical pins.
5. Fix two pins, say E and F, vertically such that the line joining the pins is inclined to the edge AB.
6. Look for the images of the pins E and F through the opposite edge. Fix two other pins, say G and H, such that these pins and the images of E and F lie on a straight line.
7. Remove the pins and the slab.
8. Join the positions of tip of the pins E and F and produce the line up to AB. Let EF meet AB at O. Similarly, join the positions of tip of the pins G and H and produce it up to the edge CD. Let HG meet CD at O’.
9. Join O and O’. Also produce EF up to P, as shown by a dotted line in Figure. 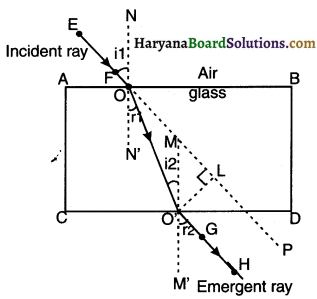 Aim: To show the converging nature of convex lens.
Caution: Do not look at the Sun directly or through a lens while doing this Activity or otherwise. You may damage your eyes if you do so.

Aim: To locate the position and examine the nature of the image formed by a convex lens for different positions of the object.

1. Take a convex lens. Find its approximate focal length in the way described in Activity 11.

2. Draw five parallel straight lines, using chalk on a long table such that the distance between the successive lines is equal to the focal length of the lens.

3. Place the lens on a lens stand. Place it on the central line such that the optical centre of the lens lies just over the line.

5. Place a burning candle, far beyond 2F1 to the left. Obtain a clear sharp image on a screen on the opposite side of the lens.

6. Note down the ‘nature, position and relative size of the image.

The nature, position and size of the images formed by a convex lens depend on the position of the object in relation, to the points O, F1 and 2F1. After nothing the various characteristics of the image, the observations are mentioned in the table below.

Aim: To locate the position and examine the nature of the image formed by a concave lens for different positions of the object.