Division of a line Segment
First of all, we will know about some basic terms.
1. Construction: The process or art of constructing, OR the act of devising and forming.
2. Similar: Two geometrical figures are similar if they are of the same shape but not necessarily of the same size.
3. Bisect: To divide into two equal parts.
4. Arc: The part of a curve between two given points on the curve.
5. Altitude: A line through one vertex of a triangle and perpendicular to the opposite side.
6. Tangent: It is a straight line which touches the circle at one point only
7. Point of Contact: The point at which the tangent touches the circle is called the point of contact
8. Concentric circles: Two circles are known as concentric circles, if they have some centre and different radii.
9. Corresponding : (i) Similar in character, form or function.
(ii) Able to be matched, joined or interlocked. 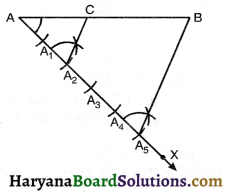 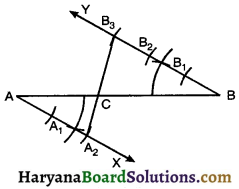 Construction of Tangents to a Circle
We study in circles (Chapter-10) that tangent to circle is a line that intersects the circle at only one point. The point is called the point of contact. The tangent at any point of a circle is perpendicular to the radius through the point of contact.
(a) Construction of Tangents to a Circle from a point outside the circle when its centre is known:
Steps of Construction:
1. Draw a Circle with centre O and given radius.
2. Mark a point P outside the circle.
3. Join OP and draw perpendicular bisector of PO meeting PO at M.
4. Draw a circle with M as centre and radius equal to PM = OM. intersecting the given circle at points Q and R. 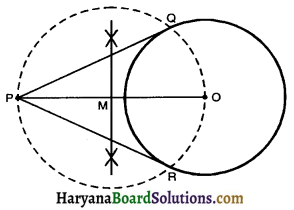 5. Join PQ and PR.
Then PQ and PR are the required tangents.

(b) Construction of Tangents to a circle from a point outside the circle when the centre of circle is not known:
Steps of Construction:
1. Taking three points A, B, C on the circle and join AB and BC.
2. Draw perpendicular bisectors of AB and BC which intersect each other at point O.
3. Then O is the required centre of the given circle. 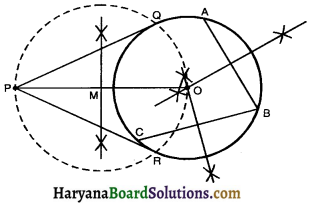 4. Mark a point P outside the circle.
5. Join PO and draw perpendicular bisector of PO meeting PO at M.
6. M as the centre, PM = MO as the radius draw another circle which intersects the previous circle at the points Q and R.
7. Join PQ and PR.
Then PQ and PR are the required tangents.