Introduction
We have studied in class IX that a circle is a collection of all the points in a plane which are at a constant distance from a fixed point. The constant distance is called the radius and fixed point is known as the centre. We have also studied various terms related to a circle like chord, sector, segment, arc etc.

In this chapter we shall learn about tangents to a circle and some of their properties. Let us now examine the different situations that can arise when a line and a circle are given in a plane.

Tangent of a circle
Consider a circle with centre O and a line P in the plane of the circle. There are three types of possibilities arise as shown in the figures below:

Rhombus : A parallelogram having all the sides equal is called a rhombus.
Circumscribed circle: The circumscribed circle or circumcircle of a polygon is a circle passing through all the vertices of the polygon. The centre of this circle is called circumcentre and its radius is called the circumradius.

The word tangent to a circle has been derived from the latin word “Tangere”, which means ‘to touch’ and was introduced by the Denish mathematician Thomas Fineke in 1583.

The tangent to a circle is a special case of the secant, when the two end points of its chord coincide. 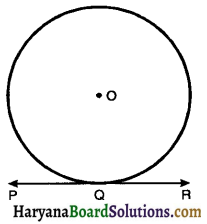 Some Properties of tangent to a circle
Theorem 10.1:
The tangent at any point of a circle is perpendicular to the radius through the point of contact.
Given: A circle with centre O and a tangent AB to the circle at a point P.
To Prove: OP ⊥ AB.
Construction: Take any point R, other than P on the tangent AB. Join OR. Suppose OR meets the circle at Q.
Proof :
OP = OQ (Radii of the same circle)
But OP < OQ + QR
OP < OR 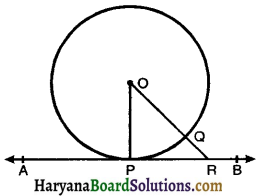 Theorem 10.2:
The lengths of tangents drawn from an external point to a circle are equal.
Given: AP and AQ are two tangents from a point A to a circle C (O, r).
To Prove: AP = AQ
Construction: Join OA, OP and OQ.
Proof: AP is a tangent at P and OP is the radius through P. 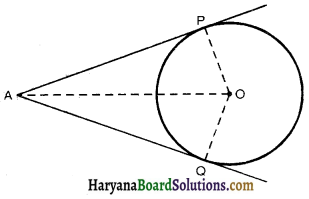