Question 1.
Who was considered a ‘foreigner’ in the past?
Answer:
In the medieval period the term ‘foreigner’ was used for any stranger who appeared, say in a given village, someone who was not a part of the society or culture.

Question 2.
State whether True or False:

Question 3.
Fill in the blanks:

(b) In the sixteenth century poet Babur used the term to describe the geography, the fauna and the culture of the subcontinent.

(d) The term ‘Hindustan’ did not carry the political and national meaning as the term ‘India’ is used today.

Question 7.
How were the affairs of Jatis regulated?
Answer:
The ways in Which the affairs of jatis were regulated were as follows:
1. Jati framed their own rules and regulations to manage the conduct of their members.
2. Jati Panchayat or the assembly of elders enforced these regulations.
3. Jatis also followed the rules of their villages.

Question 9.
What are the difficulties historians face in using manuscripts.
Answer:
(a) Manuscripts were handwritten. They used palm-leaves as paper for writing. Some are written in Shikaste (illegible) script.

(b) Since the handwriting was not always clear, the scribes made small changes in words or sentences while copying manuscripts. Over the centuries, the changes grew until the manuscripts of the same text became very different fjrom the original.

(c) Historians interpreted the facts as per the manuscripts which they got.

(ii) Historians face many problems while dividing the past into periods as there was a good amount of technological development in the “medieval” period, which can be called as ‘modern’ in the contemporary context. But still the period is called “medieval” and not “modern”. On the other hand, modern past is followed by the “medieval” past.

Question 11.
Compare either Map I or Map II with the present day map of the subcontinent; listing as many similarities and differences that you can find. 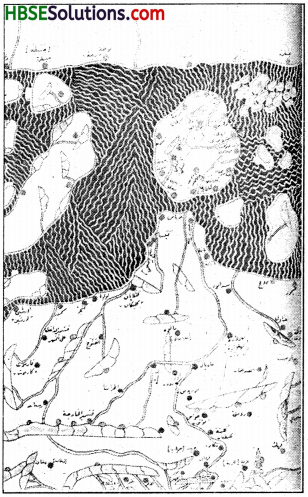 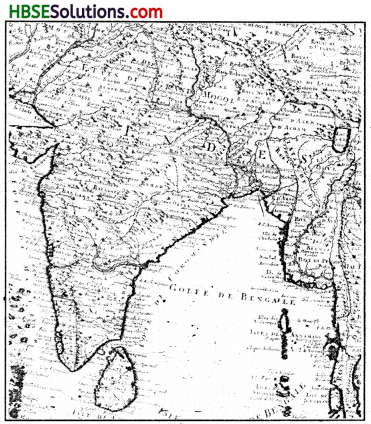 Question 12.
Find out where records are kept in your village or city. Who writes these records? Is there an archive? Who manages it? What kinds of documents are stored there? Who are the people who use it?
Answer:

Question 16.
Of the technological, economic, social and cultural changes described in this section, which do you; think were most significant in the town – or village in which you live?
Answer:
Students do youself.
(Hint: Technological changes did not have much impact on village or town life. But social cultural and economic changes had greater impact on our village life.)

Question 17.
(i) Why do you think rulers made such claims?
Answer:
Rulers wanted to show of, be popular and mighty by claming to have; control over distant territorises.

(ii) Make a list of languages mentioned by Amir Khusrau. Prepare another list of the names of language spoken today in the regions he s mentioned. Underline name that are; similar and circle those that are different. Did you notice that the names by which languages are known have\changed over time?
Answer:

Yes, there are significant changes in the spoken languages at different regions over time.

Question 18.
(i) Find out whether and for how long your state was part of these pan-reginal empires.
Answer:
Students do yourself.

(ii) Do you remember what Amir Khusrau had to say regarding Sanskrit, knowledge and Brahmanas?
Answer:
Amir Khusrau said that Sanskrit did not belong to any region. It was an old language and common people did not know it. Only the Brahmanas spoke it.

Question 19.
You are a historian. Choose one of the themes mentioned in this chapter, such as economic, social or political, history and discuss why you think it would be interesting to find out the history of that theme.
Answer:
Political theme would be interesting to explore in the historical context. Some of the reasons why to explore it, are as under:
(a) Political theme in history introduces us to our past rulers, their families, administrations, wars and battles.
(b) It also lead us to know about the various ruling practices such as, rule by group of people (republic) or monarchy etc.
(c) It imparts the knowledge about relations with neighbouring countries etc.

Question 1.
How was paper used?
Answer:
The paper was used to write holy texts, chronicles of rulers, letters and techniques of saints, petitions and judicial records, accounts and taxes.

Question 1.
Why is India called the land of many names?
Answer:
• India was named Aryavarta because this country being the abode of Aryans.
• India was named Bharat after the name of King Bharat.
• The name Hindustan and Indus were derived from Sindhu, the Vedic name of the great river of north-west.
• The Romans modified the name as Indus.
Hence India is called the land of many names.

Question 2.
What does ‘time’ mean by historians? How is the study of ‘time’ convenient for historians?
Answer:
‘Time’ for historians doesn’t mean just a passing of hours, days or years. It also reflects changes in social and economic organization, in the persistence and transformation of ideas and beliefs.

The study of ‘time’ is important because it helps historians to divide the past into large segments. The historians study the different aspects of the specific period and then assess the comparative progress and their effect on society.

Question 3.
How were the views of Shia Muslims and Sunni Muslims different from each other?
Answer:
Shia Muslims believed that Prophet Muhammad’s son-in-law, Ali was the legitimate leader of the Muslim Community. Shunni Muslims accepted the authority of the’ early leaders (Khalifas) of the community, and the succeeding Khalifas.

Question 1.
What wee the main features of jatis, during medieval period?
Answer:
(a) During medieval period, people were grouped into jatis or sub-castes and ranked on the basis of their backgrounds and occupations.
(b) Ranks were not fixed permanently, and varied according to the power, influence and resources controlled by members of jati.
(c) The status of the same jati could vary from area to area.

Question 2.
What were the problems of peasants during medieval period?
Answer:
During the medieval period, peasants had following problems:
(a) They were influenced by various forces such as – regional markets, chieftains, priests, monasteries and temples.
(b) They became part of large, complex societies and were required to pay taxes and offer goods and services to local lords.
(c) Some peasants possessed more productive land, other also kept cattle while some of them did artisanal work with agricultural activities during the lean season.